Here's Why Maxar (MAXR) is a Solid Choice for Investors

Shares of Maxar Technologies Inc. (MAXR - Free Report) have skyrocketed 236.5% in the past year against 11.1% decline of the industry. The stock currently carries a Zacks Rank #2 (Buy) and has a VGM Score of B. 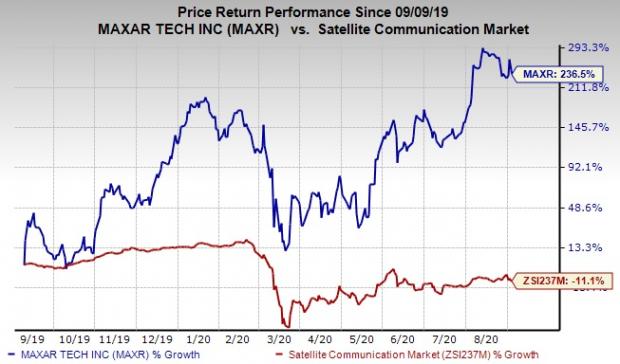 In the June-ended quarter, the Westminster, CO-headquartered company delivered a positive earnings surprise of 100%. The Zacks Consensus Estimate for its current-year earnings has been revised as much as 281% upward over the past 60 days.

What Abets the Performance?

Maxar’s growth strategy is focused on providing leading capabilities in Earth Intelligence and Space Infrastructure. In the current environment, the company is seeing strong demand as customers continue to rely on it for national security and commercial missions. Maxar is making progress on its multi-year strategy to position itself for sustained revenue, earnings and cash flow growth.

The company is executing well its strategic priorities for 2020 while responding to the COVID-19 pandemic. On Apr 8, Maxar completed the sale of the MDA business to Neptune Acquisition for $729 million. On Jul 1, it concluded the acquisition of 3D data and analytics firm Vricon for nearly $140 million.

Maxar inked contracts with the U.S. National Geospatial-Intelligence Agency to deliver land cover classification and change detection services through a combination of the Janus Geography program and the General Services Administration’s IT Schedule 70. It has been selected to support Dynetics, a wholly-owned subsidiary of Leidos, in designing and building a Human Landing System for NASA’s Artemis program, which will send the first woman and the next man to the Moon by 2024 and enable future crewed missions to Mars.

Further, the company secured a million-dollar contract from Intelsat to build four 1300-class geostationary communications satellites. Maxar has been selected by the U.S. Department of Homeland Security to develop an analytics system for tracking the behavior of vehicles in multiple domains at scale. The contract, valued at $23 million with five-year performance period, is administered through the U.S. Department of the Interior.

In the second quarter of 2020, Maxar renewed four contracts and expanded the fifth, together valued at more than $120 million, with international defense and intelligence customers for access to its satellite constellation.

The company has hired space industry veteran Jim McClelland to lead its newly-established Mission Architecture function. McClelland will play a key role in Maxar’s initiative to diversify the Space Infrastructure business and further penetrate U.S. civil and national security markets. Based on these readings, it is rational to believe that MAXR has more upside left.

Vocera delivered a trailing four-quarter earnings surprise of 70%, on average. The company’s earnings beat the Zacks Consensus Estimate in three of the last four quarters.

Acacia pulled off a trailing four-quarter earnings surprise of 17%, on average. The company’s earnings topped the consensus estimate in three of the last four quarters.