JPMorgan (JPM - Free Report) is probing whether its employees engaged in potential abuse of the Paycheck Protection Program (“PPP”) and other coronavirus relief stimulus measures. The bank’s operating committee, led by CEO Jamie Dimon, sent a memo to its employees on Tuesday, advising them to be cautious about any illegal activity or fraud relating to the government stimulus programs. The news was first reported by Bloomberg.

The memo mentioned that the bank has found out “conduct that does not live up to our business and ethical principles — and may even be illegal. This includes instances of customers misusing Paycheck Protection Program loans, unemployment benefits and other government programmes. Some employees have fallen short, too.”

JPMorgan stated, “We are doing all we can to identify those instances, and co-operate with law enforcement where appropriate. We want you to know because we need everyone to be vigilant.”

The bank declined to make any comments beyond the memo. In fact, until now, it is not known whether any action has been taken against the employees.

Notably, the government’s massive $2.2-trillion stimulus package, which was introduced to alleviate the economy from the negative impact of the pandemic, included the PPP for small businesses, enhanced unemployment benefits for individuals and support for larger companies.

And, JPMorgan has been the biggest issuer of PPP loans, extending more than $29 billion in the program.

However, in recent months, authorities have been charging individuals for abusing the PPP loans. The Justice Department recently accused almost a dozen people of participating in a “large scale” and “organized” effort to misuse the PPP funds.

Nevertheless, these big banks, including JPMorgan and Citigroup (C - Free Report) , have promised to donate the profits made from the PPP loans to charities and non-profit organizations.

Shares of the company have lost 5.8% in the past three months compared with the industry’s decline of 4.3%. 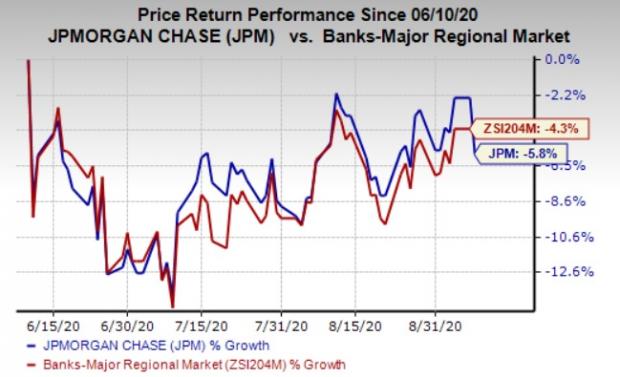 A better-ranked stock from the finance space is Interactive Brokers (IBKR - Free Report) . It has witnessed a northward earnings estimate revision of 29.7% for the current year over the past 60 days. Its share price has increased 14.4% over the past three months. It currently carries a Zacks Rank #2 (Buy).