The U.S. telecom stocks witnessed a relatively flat trajectory in the past week as latent geopolitical tensions continued to take the steam out of the sector’s growth engine. The Trump administration maintained pressure for the proposed sale of TikTok by mid-September to avoid a ban on its U.S. operations. The concerted efforts appear to be a strategic ploy to accelerate technology decoupling with China and encourage domestic firms to reorganize their global production network away from the communist nation.

However, a recent FCC report revealed that rural U.S. telecom operators that relied on cheaper telecommunications equipment from Huawei and ZTE would require an estimated $1.8 billion to replace them. The FCC urged the Congress to approve adequate funding to help these firms remove and replace the untrustworthy equipment at the earliest and has reportedly shortlisted about 50 such companies that are eligible to seek reimbursements. In order to bridge the digital divide, firms like Cisco are increasingly coming up with networking solutions that are particularly developed to cater to the rural markets.

Amid this cacophony, the proposed sale of TikTok’s U.S. operations remains mired in a geopolitical battle of supremacy as it remains to be seen how the ownership of the business would change hands. The uncertain business environment perhaps made the balancing act of the industry all the more difficult as it continued to tread on a tightrope fraught with several pitfalls, likely inducing a relatively flat growth trajectory.

1.     Verizon Communications Inc. (VZ - Free Report) has offered a $6.6 billion worth contract to Samsung Electronics to provide communication equipment for its wireless network. Although the finer details are yet to be revealed, the deal is reportedly one of the biggest of its kind secured by the South Korean firm in the next-generation 5G network market.

With Huawei losing ground due to various trade restrictions imposed by the Trump administration, and Nordic firms Nokia Corporation and Ericsson gaining precedence, the contract win assumes great significance for Samsung. The deal is likely to strengthen its presence in the global total telecom equipment market and could make way for similar deals in the near future. In addition, it is likely to give Samsung a leverage to better negotiate with other countries for high-quality 5G network equipment and realign the segment at the expense of its Chinese counterpart.

Importantly, the 5G deployment builds on more than 20 years of partnership between Ericsson and Orange Spain. The initial 5G deployments in Madrid and Barcelona will be followed by other locations under a four-year partnership to help Orange Spain develop its 5G offering across Spain. Operating on a 3.6GHz spectrum, the 5G network in Madrid and Barcelona is powered by the Ericsson Radio System.

SGCC provides electrical power to more than 1.1 billion people across 26 provinces, covering 88% of China’s national territory. The company is modernizing its communications infrastructure to meet the increased demand for transferring huge amounts of data across long distances. The latest move will enable SGCC to expand its network coverage to more power stations and offices while increasing capacity.

The ADTRAN MetNet 60GHz HPv2 CPE, which is part of ADTRAN’s fixed wireless portfolio, has been designed with the technology developed by Cambridge Communication Systems. It operates on a 90-degree phased array antenna that doubles the network coverage over legacy gigabit mesh solutions.

The product launch is likely to make the Orbi technology more accessible to a broader spectrum of audience by catering to the accretive bandwidth requirements of almost every household. The Orbi Pro Wi-Fi 6 (SXK80) Tri-band Mesh System is a multi-node mesh system, which includes one router and one satellite, and offers stable WiFi connection spanning an area of nearly 18,000 square feet. 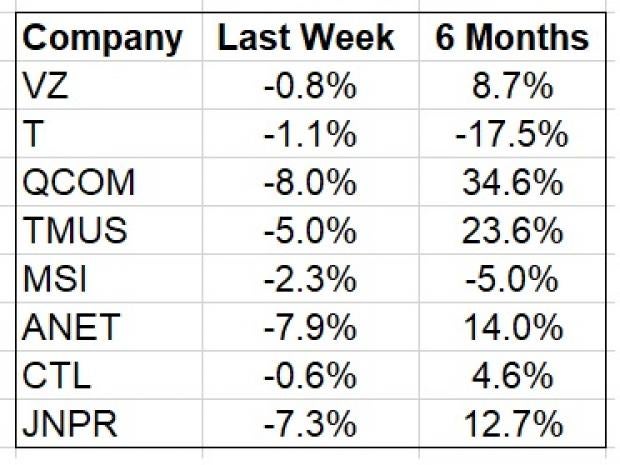 In the past five trading days, none of the stocks went up, while Qualcomm was the biggest decliner with its stock falling 8%.

Over the past six months, the Zacks Telecommunications Services industry has rallied 4%, while the S&P 500 has gained 24.1%. 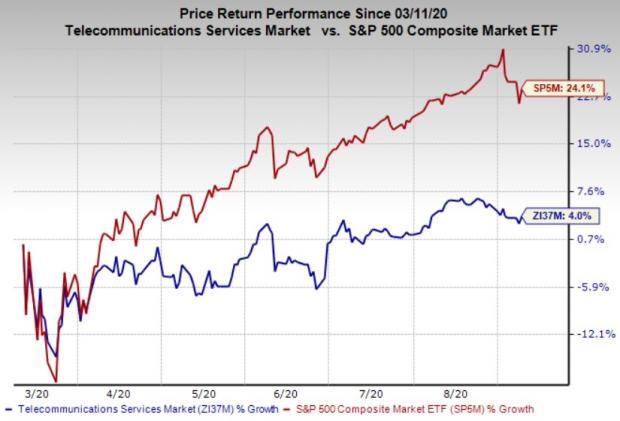 In addition to the 5G deployments and product launches, all eyes will remain glued to how the administration continues to safeguard the interests of domestic telecom firms from perceived Chinese threats and how the TikTok saga unfurls.