Despite the heightened volatility caused by the coronavirus outbreak since mid-March, which affected many businesses, the performance of one of the leading global investment managers — BlackRock, Inc. (BLK - Free Report) — has remained decent.

After hitting its 52-week low on March 23, shares of the company have significantly regained the lost ground and are up 69.3% so far this year despite continued concerns related to the virus. 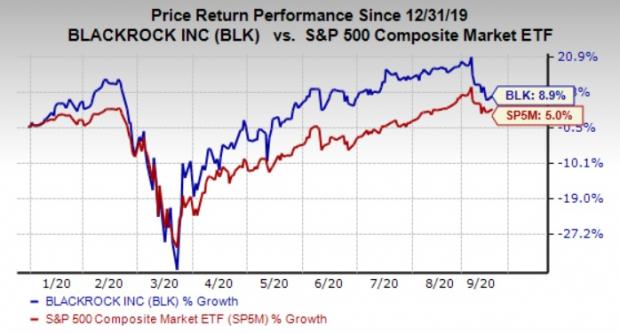 Notably, the Zacks Investment Management industry, to which BlackRock belongs, currently carries a Zacks Industry Rank #85. This places the industry at the top 34% of more than 250 Zacks industries. The industry’s positioning in the top 50% of the Zacks-ranked industries is a result of decent earnings outlook for the constituent companies in aggregate.

During the first quarter of 2020, most of the investment managers witnessed steady outflows (mostly in March), which resulted in a decline in assets under management (AUM) balance. However, the trend reversed post that as investors started to become optimistic and the second quarter witnessed decent inflows, which aided AUM.

Moreover, driven by solid investment performance, growth in AUM is expected to continue in the near term for majority of investment managers. Also, the growing demand for personalized investment products is anticipated to open up growth opportunities for asset managers.

However, with the anticipation of a second wave of the pandemic hitting certain countries, which might result in heightened market volatility once again, it is too early to measure the full impact of the virus on the investment management industry. Nonetheless, at present, the sector seems to be better equipped than others to deal with systemic jolts.

Thus, BlackRock seems to be well-poised amid the current economic scenario. In fact, the company’s fundamental strength makes it worth considering right now.

Its revenues (GAAP basis) witnessed a CAGR of 5.6% over the last six years (ended 2019), with the uptrend continuing in the first six months of 2020. Over the same period, its AUM witnessed a CAGR of 9.8%. Broad product diversification, revenue mix, steadily improving AUM balance, efforts to strengthen the iShares and ETF operations, and increased focus on active equity business are expected to further aid the top line.

Moreover, last month, BlackRock became the first global asset manager to get consent to kick start operations in China. It received approval from the China Securities Regulatory Commission to set up a mutual fund unit in the country and has six months to establish a wholly-owned subsidiary in Shanghai.

These come as various finance companies seek to expand operations in China as the country is removing foreign ownership limits on financial firms. Of the many firms that are seeking to expand in China, some, which have already started taking advantage of the options available, are JPMorgan (JPM - Free Report) , Goldman Sachs (GS - Free Report) and Morgan Stanley (MS - Free Report) .

BlackRock’s inorganic growth strategy seems impressive. It has expanded via both domestic and overseas acquisitions. Last year, it acquired eFront, while in 2018, the company acquired Citibanamex’s Asset Management business in Mexico and Tennenbaum Capital. Apart from these, over the years, the company acquired several firms across the globe, thus, expanding its footprint and market share.

Further, given its earnings strength, BlackRock’s capital-deployment activities look sustainable. The company has been raising dividends annually, with the last hike of 10% announced in January 2020. Based on the last day’s closing price, its dividend yield currently stands at 2.65%.

Also, while other asset managers like Invesco (IVZ - Free Report) have suspended share buybacks for the current year on the assumption of the continuation of the unfavorable operating backdrop, BlackRock is still actively involved in repurchases. In the first half of 2020, it repurchased shares worth $1.5 billion, including repurchases made from PNC Financial (PNC - Free Report) .

Thus, through efficient capital deployments, the company is expected to continue to enhance shareholder value in the future.

In addition to its fundamental strength, its earnings growth projections seem impressive. For 2020 and 2021, the Zacks Consensus Estimate for BlackRock’s earnings suggests growth of 3.4% and 8.6%, respectively, from the year-ago reported figure. Notably, in the past three-five years, the company’s earnings grew at a rate of 11.2%, higher than the industry average of 8.1%.

Looking at the above-mentioned factors, the company seems well-positioned to deal with the current economic situation. Hence, it would be best to retain the stock in your portfolio now as BlackRock currently has a Zacks Rank #3 (Hold). You can see the complete list of today’s Zacks #1 Rank (Strong Buy) stocks here.