Also, semiconductor companies need to be significantly large in scale in order to compete effectively in this coronavirus induced volatile environment. Therefore, resorting to massive M&A in a bid to grab more market share, cut costs, boost productivity and improve investment returns through scale economies is a compelling proposition.

Investor excitement following the deal was palpable with shares of NVIDIA gaining 5.8% on Sep 14, closing at $514.89. The company currently carries a Zacks Rank #3 (Hold). 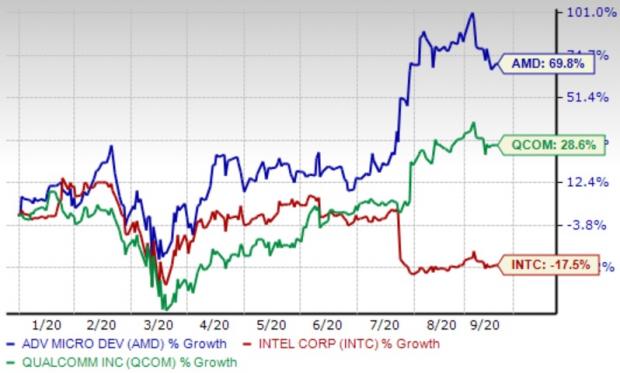 The transaction, which has been approved by the boards of directors of NVIDIA, SoftBank and Arm, is expected to be immediately accretive to its non-GAAP gross margin and non-GAAP earnings per share. (Read More: NVIDIA Stock Is Cheap and Arm Is a Big Deal)

Are AMD & Intel at Risk?

The massive consolidation with far reaching effects has caused ripples across the semiconductor industry.

Arm acquisition is expected to aid NVIDIA in offering end-to-end ecosystem of technology across the data center, IoT, autonomous vehicles and mobile domains.

With continued innovation over the decades, the enhancement of inference capabilities of chips has gained prominence. Additionally, momentum in Internet of Things (IoT), fueled by accelerated deployment of 5G, is believed to add an extraordinary volume in sales of electronic devices, which in turn favors the prospects of NVIDIA.

Ongoing momentum of Arm-based devices coming to the market and synergies from NVIDIA’s AI expertise are likely to intensify competition in the mobile segment, which is a headwind for AMD.

Moreover, Intel (INTC - Free Report) has been witnessing stiff competition in the server, storage and networking markets. Arm’s strengthening position in the fast-growing micro server segment and solid uptick of its advanced designs at several Intel competitors, is a constant risk.

Also, NVIDIA’s alliance with IBM poses stiff competition in the high performance computing (HPC) accelerator segment. The company has been also facing the brunt of delay in 7 nm process-based chips.

What’s in Store for QUALCOMM & Samsung?

Arm is a notable supplier of designs and intellectual property to most of the global semiconductor industry, licensing its technology to customers including Apple (AAPL - Free Report) , Intel, QUALCOMM (QCOM - Free Report) and Samsung (SSNLF - Free Report) .

Although NVIDIA has stated that it will maintain Arm’s customer neutrality, it is likely that the deal will see strong opposition from the company’s rivals, including Intel, QUALCOMM and Samsung.

Samsung, meanwhile, leverages Arm’s designs to power Exynos chipsets and boost performance of its Cortex CPU and Mali GPU. The Korea-based tech biggie was reportedly looking to acquire a small stake in Arm, in 3- 5% range.

It remains to be seen how dynamics with customers evolve over time, especially, whether Arm’s customers look for alternatives in RISC-V. Notably, RISC-V is a royalty free open standard instruction set architecture based on established principles. Moreover, if or whether NVIDIA raises royalty fees also remains a concern, and might invite hindrance to the acquisition process.

Further, the acquisition is subject to customary closing conditions, including the receipt of regulatory approvals from U.K., China, the European Union and the United States. Markedly, within hours of the deal's announcement, there have been murmurs of protest emerging in South Korea and China. Completion of the transaction is expected to take place in approximately 18 months. (Read More: NVIDIA Clinches Deal to Acquire Softbank's Arm for $40B)