The MAA is seeking label expansion of Kaftrio (ivacaftor/tezacaftor/elexacaftor) in combination with the company’s another CF drug, Kalydeco (ivacaftor) as a potential treatment for CF patients aged 12 years and older who have at least one copy of the F508del mutation in the cystic fibrosis transmembrane conductance regulator (“CFTR”) gene

The regulatory application in Europe is supported by positive data from the phase III 445-104 study. Data from the study demonstrated that treatment with Kaftrio achieved a statistically significant 3.7% improvement in ppFEV1, a key measure for lung function, from baseline.

Kaftrio is already marketed in the United States as Trikafta, which was approved by the FDA in October 2019. Trikafta’s early approval and launch was a significant milestone for Vertex. The drug generated sales worth $1.8 billion in the first half of 2020. It saw a solid uptake in the country since its early unveiling and has been a key growth driver since then. A similar performance in Europe will be beneficial for the company. Vertex has already received reimbursement agreements for Kaftrio in EU countries, such as England, Denmark, the Republic of Ireland and Germany.

Shares of Vertex have rallied 20.9% so far this year against the industry’s decrease of 3%. 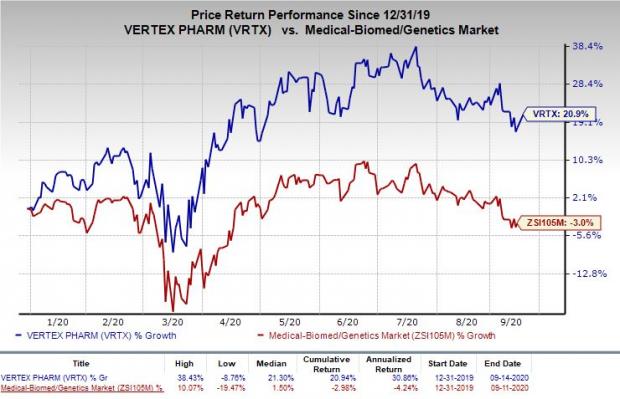 Meanwhile, Trikafta is also being evaluated in phase III studies for treating children aged from six years to 11 years. A supplemental new drug application (sNDA) seeking an approval for the pediatric patient population is expected to be filed in the fourth quarter of 2020. Trikafta/Kaftrio is crucial for Vertex’s long-term growth as it comes with the potential to treat up to 90% of CF patients.

Vertex’s revenue growth in 2020 so far has primarily been recognized from the uptake of Trikafta as well as higher international revenues owing to additional ex-U.S. reimbursement arrangements. Notably, a high percentage of the currently eligible patients is already on Trikafta. The approval of Kaftrio in the EU, reimbursement deals for the product in EU countries and approval for a younger patient population could bring additional Trikafta/Kaftrio revenues in 2021.