In a bid to boost its product offerings, JAKKS Pacific, Inc. (JAKK - Free Report) has entered into a multi-year global toy licensing deal with HARIBO Group to create a toy line based on the latter’s gummi candy.

Per the agreement, JAKKS Pacific has obtained rights to manufacture, market and distribute the new product in the North America and EMEA territories. Notably, the products are likely to vary from GOLDBEARS to TWINSNAKES and HAPPY-COLA.

In this regard, senior vice president of JAKKS Pacific, Jill Nordquist stated, “We are thrilled to partner with HARIBO in bringing to life a truly sweet line of toys and collectibles that will appeal to collectors and HARIBO fans of all ages.”

Nonetheless, the company announced the official global launch in August 2021, followed by product extensions slated for release in 2022.

Since the beginning of 2017, the company has entered into multiple licensing agreements across varied product lines, which hit stores throughout the year. The company’s licensing partners are responsible for some of the most popular intellectual properties in the world, including The Walt Disney Company, Marvel, Pixar, DC Comics, Warner Bros. and NBC Universal. It is also in talks over licensing deals with competitors like Lego, Hasbro and Mattel. 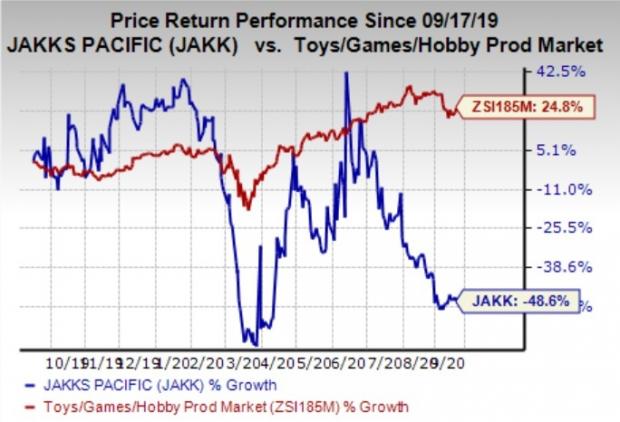 Coming to price performance, shares of JAKKS Pacific have declined 48.6% in the past year against the industry's 24.8% growth. Notably, the company has been negatively impacted by the coronavirus outbreak. Although the company cannot estimate the impact of the COVID-19 outbreak at this time, it is likely that the pandemic will have a material adverse effect on the company’s sales expectations for fiscal 2020. Also, rise in interest expenses along with high debt levels poses concerns. Notably, earnings estimates for 2020 have moved down over the past 30 days, depicting analysts’ concern over the stock’s growth potential.

Activision Blizzard has a three-five year earnings per share growth rate of 17.3%.

Mattel has a trailing four-quarter earnings surprise of 74.4%, on average.

Here's Why You Should Hold on to Kinder Morgan (KMI) Now