Per the agreement, BetMGM will provide educational information about the BetMGM app to Raiders fans in Nevada. Sports lovers in Nevada need to register on the BetMGM app, which is available on iOS and Android, by visiting any MGM Resorts Sports Book in Las Vegas.

MGM Resorts is not only the official sports betting partner of Raiders but also a founding partner of Allegiant Stadium, with prominent brand presence throughout the stadium.

MGM Resorts CEO and president, Bill Hornbuckle stated, "All of us at MGM Resorts are proud to welcome the Raiders and the NFL to Las Vegas. We look forward to providing Raiders fans a world-class sports betting and entertainment experience, both in our BetMGM Sportsbooks and digitally, through the BetMGM mobile app."

MGM Resorts continues to focus on sports betting expansion. Recently, BetMGM and GVC Holdings announced a second round of investment. This reached the total investment to $450 million. In the first round, the companies invested $200 million. Ever since its launch in 2018, the company has done well and is on track to operate across 11 states by the end of 2020.

BetMGM is likely to generate more than $130 million of revenues in 2020, primarily from iGaming in New Jersey on account of the COVID-19 impact. Due to an uptick in operations across the United States, the company anticipates sharp growth in the coming year. It also expects to generate revenues of nearly $8.5 billion by 2025.

Shares of MGM Resorts have fallen 32.3% year to date compared with the industry’s decline of 18%. 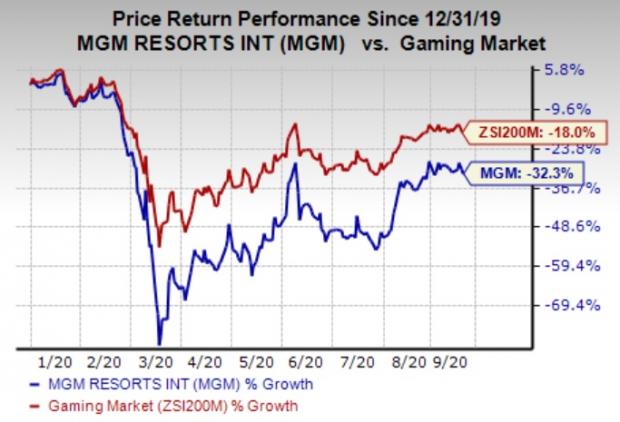