Markedly, per AMD’s estimates, new Ryzen mobile processors offer up to 212% enhanced performance for content creation and multitasking over the prior generation of AMD-powered Chromebooks. Also, the new processors, embedded with AMD Radeon Graphics, will aid users with almost 178% faster web browsing compared to that of the previous generation.

These robust features are expected to drive adoption of the Chromebooks, powered by new processors, which in turn is likely to bolster AMD’s brand reputation and instill investor optimism in the stock. 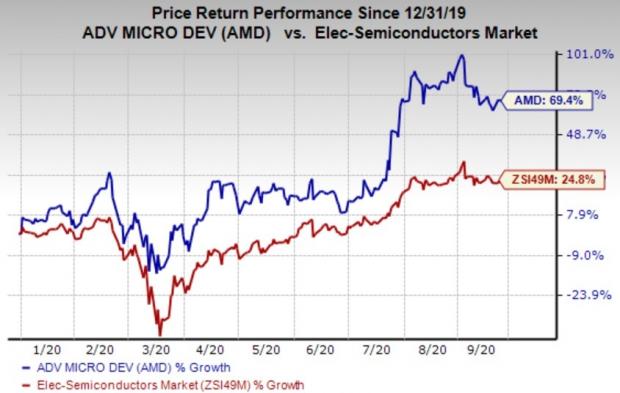 Notably, shares of AMD have returned 69.4% in the year-to-date period compared with the industry’s rise of 24.8%.

Surge in remote work trends stemming from the coronavirus pandemic is driving demand for faster and more responsive processors to boost business processes. Enterprises and professionals are looking to purchase systems that offer enhanced performance and security to meet the changing work environments.

As more people are being forced to stay indoors due to the coronavirus led shelter-in-place orders, there has been a rise in user engagement for browsing the web, multitasking, or streaming video. Moreover, the power-efficient 3000 C-Series mobile processors support thinner and lighter Chromebook designs, which are loaded with advanced Wi-Fi 6 and Bluetooth 5 capabilities for enhanced connectivity.

These factors are expected to lead to a significant improvement in uptake of new Chromebooks.

Further, the growing momentum of commercial laptops and Chromebooks, driven by work-from-home, online learning and gaming, is likely to positively impact laptop-makers which bodes well for the adoption of AMD’s processors that are designed specifically for workforce business productivity purposes. Per the latest IDC report, PC shipments were up 11.2% on a year-over-year basis to 72.3 million in second-quarter 2020.

The growing traction of the latest processors favor the long-term growth prospects of AMD, which currently carries a Zack Rank #3 (Hold). You can see the complete list of today’s Zacks #1 Rank (Strong Buy) stocks here.

AMD is likely to be affected by COVID-19 induced broader macroeconomic weakness prevailing in the market.

Also, increasing expenses on product development are anticipated to limit margin expansion. Further, stiff competition from Intel (INTC - Free Report) is likely to lead to pricing pressure and dampen profitability at least in the near term.

In May, Intel launched the latest 10th Gen Intel Core vPro processors to support the remote work requirements of business enterprises. The i5 variant of the processors feature 4 cores with 8 threads while the i7 variant offers 4/6 cores with 8/12 threads. These also come with Wi-Fi 6 (Gig+) integration for enhanced connectivity.

Also, NVIDIA's acquisition of ARM Holdings, might aid the acquirer to provide full stack CPU-GPU offering, which poses a headwind for AMD.