Dave & Buster's Entertainment, Inc. (PLAY - Free Report) is likely to benefit from increased focus on amusement business, digital initiatives, store reopening and expansion plans. In the past three months, shares of the company have rallied 16.6% compared with the Zacks Retail – Restaurants industry’s 13.1% growth. However, decline in traffic and soft comps remain concerns.

Let us delve into factors that suggest that investors should hold on to the stock for the time being.

Dave & Buster's continues to perform well on the back of the unique customizable experience that it offers across its four platforms, “Eat, Drink, Play and Watch.” Apart from great food or beverages, the company’s entertainment business has been driving growth. Furthermore, the company continues to evolve its amusement business on the back of new and riveting content — including games based on some of the world’s finest movie properties. Notably, amusement and other revenues accounted for 66.6% of total revenues in the fiscal second quarter. 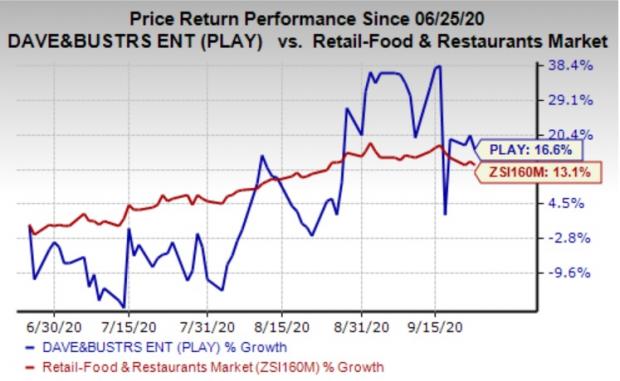 The company believes that it can drive traffic by enhancing in-store and out-of-store customer experience via digital and mobile initiatives as well as through employing better technology. Notably, the company intends to strengthen its growing loyalty database by investing in other mobile applications for building customer connections and driving frequent customer visitation.

Meanwhile, to recover its business post the coronavirus-induced shutdowns, Dave & Buster's is focused on reopening stores in compliance with the state and local regulators. Given the size of its stores, the company is well placed to generate significant revenues despite capacity limitations and social-distancing protocols. During the fiscal second quarter, the company reopened 83 stores in 27 states, Puerto Rico and Canada. Moreover, the company continues to pursue a disciplined new store growth strategy in both new and existing markets. Management believes that it can extend the concept to more than 200 units in North America over time.

Nonetheless, the company possesses enough liquidity to survive the coronavirus pandemic for some time. As of Aug 2, 2020, the company’s cash and cash equivalents totaled nearly $224.3 million compared with $156.8 million as on May 3. The company’s net long-term debt at the end of second-quarter fiscal 2020 stood at $731.6 million, down from $735.3 billion as of May 3, 2020. Resultantly, the company’s debt to capitalization has improved to 74.9% from 79.6% in the previous quarter, indicating manageable debt levels.

The coronavirus outbreak has rattled the Retail - Restaurants industry, and Dave & Buster's is not immune to the effects. Although the company has reopened majority of its restaurants, it is likely to witness dismal traffic due to social-distancing protocols. Owing to the uncertainty of the crisis, the company has also suspended its dividend payout and share buyback programs.

Brinker has a three-five year earnings per share growth rate of 11.4%.

BJ's Restaurants has a trailing four-quarter earnings surprise of 54.9%, on average.

Protect Your Portfolio From Volatility With 6 Low-Beta Picks