The challenging Alzheimer’s disease (AD) market sees yet another failure. Shares of Swiss-based, clinical-stage biopharmaceutical company AC Immune SA (ACIU - Free Report) recently plunged after it announced disappointing data on anti-Tau antibody semorinemab from a mid-stage study on AD. AC Immune has a collaboration agreement with Genentech, a member of the Roche Group (RHHBY - Free Report) for the development of semorinemab. Roche was evaluating the candidate in a 73-week, double-blind, placebo-controlled phase II study, TAURIEL, to determine if it can slow the rate of clinical decline in early (prodromal to mild) AD.

AC Immune’s shares have plunged 43.6% in the year so far compared with no movement for the industry. 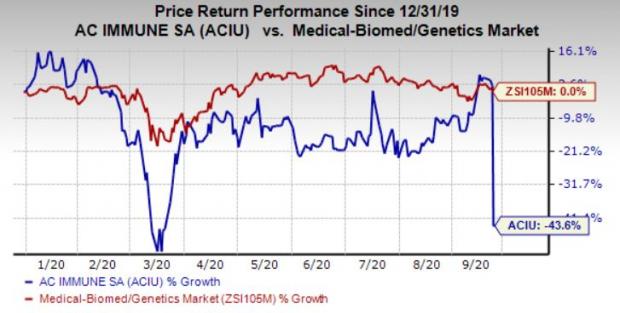 This, in turn, brings focus on the AD space, which has seen quite a lot of failures.

A type of dementia, Alzheimer’s Disease (AD) is a progressive medical condition, impairing memory and other mental functions. Its key symptoms include memory loss and loss of other essential cognitive abilities that hinder even daily activities in an individual’s life.

The AD market has attracted a lot of attention from several biggies in the pharma/biotech space, given its market potential. Per estimates, more than 5.5 million Americans may have dementia caused by Alzheimer’s. Most of these patients age 65 or older.

There are a few drugs approved by the FDA for AD that help control the symptoms. Aricept (donepezil), Exelon and Razadyne are used to treat mild-to-moderate dementia associated with AD.

However, the successful development of therapies for treating Alzheimer’s disease is challenging due to the risk of adverse events. Big shots like Merck, Novartis (NVS - Free Report) and Amgen, among others, had earlier terminated the development of candidates for AD due to the failure of studies.

Earlier in the year, Roche announced disappointing results from a phase II/III study on gantenerumab in patients with a rare inherited form of AD. Results showed that the gantenerumab arm of the study did not meet its primary endpoint as patients did not show a significant slowdown in the rate of cognitive decline.

Nevertheless, the silver lining in these clouds is Biogen’s (BIIB - Free Report) and Eisai’s aducanumab, an investigational treatment for Alzheimer’s disease. The FDA has accepted the Biologics License Application (BLA) for aducanumab and granted Priority Review to the same with a Prescription Drug User Fee Act (PDUFA) action date on Mar 7, 2021. If approved, aducanumab would become the first therapy to reduce the clinical decline of Alzheimer’s disease and also the first therapy to demonstrate that removing amyloid beta resulted in better clinical outcomes. Although Biogen too had faced challenges in the development of the candidate, a potential approval will be a significant boost to the company and give AD patients a ray of hope.