JPMorgan to Move Assets to Germany Amid Britain's Exit From EU

As Britain exits the European Union (“EU”), JPMorgan (JPM - Free Report) plans on shifting 200 billion euros ($230 billion) of assets from the U.K. to Germany. The news was first reported by Bloomberg, citing people with knowledge of the matter.

Britain has exited the EU and the transition period will end in December. Hence, JPMorgan wants to complete the migration of its assets to the Frankfurt-based subsidiary before December-end.

The assets that will be migrated represent marginally less than 10% of the company’s total balance sheet.

Before Brexit, London was the financial hub for most of the companies operating within the EU.

However, now, companies with operations in London will lose their “passporting rights”, which allowed them to provide services to other member countries of the EU from London.

In fact, the EU’s banking watchdog said in July that banks that have been using Britain as a doorway to the EU now have to fully execute their plans for serving customers within the EU before the transition period ends. This is because financial companies from the EU will now need authorization to operate in Britain as a branch or subsidiary.

As banks prepare to relocate jobs out of London, JPMorgan last week asked nearly 200 of its London staff to shift to other European cities like Paris, Milan and Madrid.

Notably, JPMorgan’s move to shift assets to Germany is not just a result of Brexit alone. The Wall Street giant believes that its unit in Germany will seek market share in investment banking, corporate banking and wealth management.

Shares of JPMorgan have gained 1.1% over the past six months compared with the industry’s rally of 4.7%. 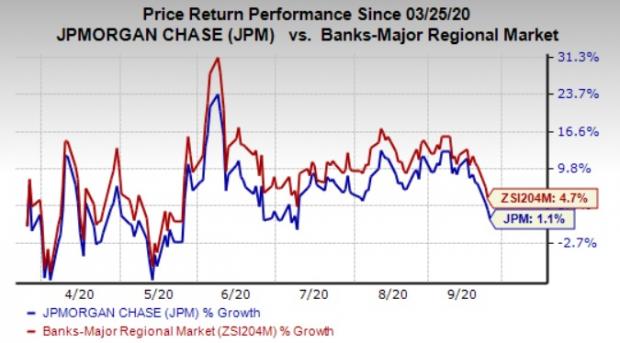