AMZN Ups Ante Against GOOGL, MSFT & Others in Cloud Gaming

The gaming industry is constantly gaining momentum with the growing proliferation of cloud gaming worldwide. Moreover, the coronavirus pandemic, which has imposed the social distancing and stay-at-home restrictions, has turned out to be a boon for the industry as online games have become a major source of entertainment.

Given the upbeat scenario, Amazon (AMZN - Free Report) is making concerted efforts to bolster its gaming footprint on the back of its robust cloud capabilities. This is evident from the introduction of its latest cloud gaming service namely Amazon Luna.

Luna, which is designed to feature instant play, is built on Amazon Web Services (AWS) for the robust scalability and low latency. Moreover, the company strives to deliver enhanced gaming experience by allowing players to access games on Luna from anywhere by leveraging AWS game servers.

Players will be able to play games on Luna with the help of a keyboard or mouse or Bluetooth game controller. Further, Amazon unveiled the cloud-based Alexa-integrated Luna Controller for this purpose, which is well-equipped to deliver lower latency gaming with uninterrupted wifi.

We note that the latest move makes the company well-poised to capitalize on growth prospects present in the cloud gaming space.

Further, a MarketsandMarkets report suggests that the cloud gaming market will reach $3.1 billion in 2024, witnessing a CAGR of 59% between 2019 and 2024. 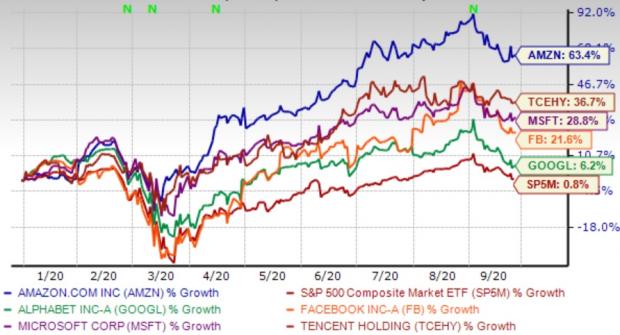 Notably, the subscription-based game channel of Amazon Luna called Luna+ allows players to stream and play its growing library of action games, adventure games, platformers and fan-favorite games on the devices they own.

At present, Amazon made the service accessible early on request for customers in the United States. The service will stream titles like Resident Evil 7, Control, Panzer Dragoon, A Plague Tale: Innocence, The Surge 2,Yooka-Laylee,The Impossible Lair, Iconoclasts, GRID, ABZU and Brothers: A Tale of Two Sons.

Initially, Luna will be available on PC, Mac, Fire TV, andweb apps for iPhone and iPad. Further, it will be rolled out on Android soon.

Apart from this, the company in collaboration with video game publisher Ubisoft rolled out a gaming channel whose subscription will give access to popular Ubisoft titles and new titles such as Assassins Creed Valhalla, Far Cry 6 and Immortals Fenyx Rising on their release.

We believe that Amazon is likely to gain solid traction among gamerson the back of Luna and its features.

A Challenge to Google & Microsoft

Amazon clearly poses a challenge to Google and Microsoft, who are also making concerted cloud-gaming efforts.

Google’s launch of its cloud-basedvideo game streaming platform namely Stadia in the latter part of last year remains noteworthy. In early 2020, the company announced the opening of a second development studio for Stadia. Currently, it is working on 450 games, which will be available on Stadia in 2020 and beyond.

Further, the company’s acquisition of Typhoon Studios, a video game developer start-up based in Montreal, Canada, remains a major positive. The buyout is enhancing Google’s gaming skills, which will help it in delivering enhanced gaming experience to players. This, in turn, will bolster the adoption rate of Stadia.

Microsoft recently rolled out its cloud gaming service for Xbox users namely XCloud across 22 markets in North America and Europe. Players are getting access to100 game titles, including Minecraft Dungeons, Halo, Sea of Thieves, Gears 5, Destiny 2, and Tell Me Why, as part of their Xbox Game Pass Ultimate subscription.

Further, this Zacks Rank #3 company collaborated with companies like Razer, 8BitDo and Nacon to develop specific accessories for cloud gaming.

Additionally, Microsoft is now gearing up to launch the service in Japan in the first half of 2021.

Facebook and Tencent’s initiatives in the cloud gaming market are hard to ignore.

Facebook’s acquisition of a Spanish cloud gaming company —PlayGiga—in an effort to gain a foothold in this particular market remains a major positive. Moreover, the social media giant, which carries a Zacks Rank #3 at present, offers Facebook Gaming, which allows users to livestream their gameplay.

Further, Tencent’s partnership with Huawei to set up a laboratory to develop a cloud gaming platform remains noteworthy.

Harley-Davidson Withdraws From India as Part of Restructuring