Harley-Davidson Withdraws From India as Part of Restructuring

Harley-Davidson (HOG - Free Report) recently announced the decision to exit India, the world's largest two-wheeler market, by discontinuing its sales and manufacturing operations in the country. The decision comes in as part of the company’s global restructuring plan, per which it has been withdrawing from markets, where achieving high levels of volume and profitability is a daunting task.

The coronavirus pandemic has crippled the auto industry, straining auto sales in India. To revitalize the economy, Indian Prime Minister Narendra Modi had announced the “Make in India” program. In this program, the government is offering incentives worth billions of dollars to attract global firms for investing in manufacturing units in the region, including production-linked allowances for automakers. Harley-Davidson’s exit from the Indian market is a setback for Prime Minister Modi’s strategy to persuade global manufacturers to invest in domestic manufacturing in the country.

The iconic motorcycle manufacturer commenced operations in India in 2011, but has since then battled to establish a robust foothold in the Indian bike market. The company failed to compete with the country’s domestic brand Hero as well as the Japan-based Honda Motor who became leaders of the two-wheeler market in India. The Milwaukee-based motorcycle manufacturer struggled for years to boost sales and improve profits in the country.

Harley-Davidson will incur restructuring cost of $75 million as a result of this exit, which includes one-time termination benefits of $3 million, non-current asset adjustments of $5 million, and contract termination and other costs of $67 million. Moreover, the exit from India will result in closure of the company’s manufacturing unit in Bawal, Haryana, as well as layoff of 70 employees involved in Indian operations. The company will only hold on to a downsized sales office in Gurugram. Also, Sanjeev Rajasekharan, Managing Director of Harley-Davidson’s India operations, will be transferred to Singapore for heading its Asia unit.

Furthermore, the company has failed to provide any strong conformity on the continuance of its after-sales service support and availability of spare parts to the bikes already sold in the country. Reportedly, only about 30 Harley-Davidson dealerships and an equal number of service centres were operational in India before news of the exit surfaced. Following the news of the exit, the individual Harley-Davidson dealer websites became non-functional, aggravating fears among the existing Harley bike owners in India.

Harley-Davidson is the not the first automaker to cease operations in India. Due to the country’s stringent tax structure, international automakers have always struggled to make place in the Indian auto space. Such hefty taxes dent automakers’ margins and also restrict from rolling out new products. U.S. President Donald Trump has always been critical about India's elevated tax structure, openly expressing his displeasure on the high import tariff levied on Harley-Davidson bikes. In February, India's import tariffs were cut down to 50% but the brand still failed to survive in the market.

The Harley-Davidson news came right after Toyota Motor (TM - Free Report) decided to halt its expansion plans in India due to the country’s punitive tax structure. In the past, General Motors (GM - Free Report) had exited the country in 2017 as it was unable to maintain its market share. Furthermore, Ford Motor (F - Free Report) entered into a joint venture with Mahindra & Mahindra Ltd. in India after being unable to win over customers for years, which aborted its independent operations in the country.

Harley-Davidson has been facing its own share of obstacles, of late. The company reported its first quarterly loss in years for the three-month period ended in June. To pull out the company from the sales slump, Harley Davidson’s CEO Jochen Zeitz laid out a turnaround plan, dubbed as ‘Rewire’, and is working on a five-year (2021-2025) strategic plan ‘Hardwire’ that is expected to be shared in fourth-quarter 2020. The plan aims to overhaul its operating model and revamp the organization powered by the strength of its legacy brands, optimization of dealer network and prudent inventory management. It should be noted that Harley-Davidson expects 2020 cash savings of $250 million, including SG&A and capex reductions under the Rewire plan.

Putting quality over quantity, the company is focused on clearing excess inventory and streamlining the model line-up by 30%. It is also assessing plans to exit unprofitable international markets and emphasize on 50 markets, primarily in North America, Europe and the regions in Asia-Pacific that hold high potential.

Shares of the company have declined 37.9%, year to date, underperforming the industry’s rally of 116.2%. 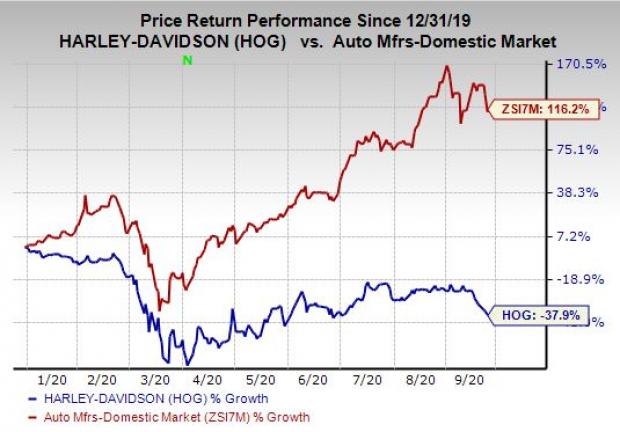 Why Hold Strategy is Apt for Sonoco Stock Right Now