Race to Deliver Autonomous Vehicle Peps Up: 5 Biggies in Focus

The rapid development in the self-driving vehicle space can primarily be attributed to breakthroughs in technology, with the integration of robust AI and ML capabilities in the advanced driver-assistance system (ADAS).

Moreover, improving neural networking capabilities, and advancements in digital mapping and obstacle-recognition functionalities are expected to lead to safer navigation, reduction in accidents and commuter comfort.

The automotive industry bigwigs are making every effort to enhance the safety of passengers and drivers in EVs and self-driving cars, and foot-travelers in transit. Consequently, advanced testing methodologies are in huge demand as automakers and tech companies seek to deliver advanced ADAS systems.

Despite the coronavirus pandemic-led crisis, the optimism in this space is evident from the notable performance of Global X Autonomous & Electric Vehicles ETF (DRIV), which has gained 8.9% year to date compared with the rise of 0.5% recorded by SPDR S&P 500 ETF Trust SPY.

Per MarketsandMarkets data, the ADAS market is set to hit $83 billion by 2030 from $27 billion in 2020, witnessing a CAGR of 11.9%. Ongoing momentum of mobility as a service (MaaS) solutions and the accelerated deployment of 5G are anticipated to be tailwinds. 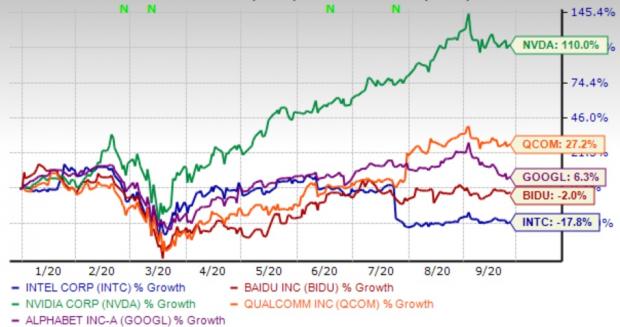 On the heels of alluring prospects, Intel (INTC - Free Report) is zooming ahead in the autonomous driving industry with its latest developments in the field.

Mobileye in partnership with Al Habtoor Group will devise a fleet of automotive 'robotaxis' that could hit the streets of Dubai by 2022. The multi-million dollar deal will start by deploying Mobileye’s system into 1,000 cars to map Dubai and collect data.

The testing of the autonomous vehicles is slated to commence in 2021, with a pilot program slated for by the end of 2022. A commercial service is planned for 2023, with a target of a few hundred vehicles within five years.

Markedly, the increasing proliferation of ADAS and the ramp-up of new IQ programs are expected to bolster Mobileye’s revenues. The low power consumption of Mobileye chips and the ability to create maps for self-driving systems via its Road Experience Management platform helped Intel, which is currently carrying a Zacks Rank #3 (Hold), to gain a footprint in the market.

Alphabet (GOOGL - Free Report) has been aggressively strengthening Waymo initiatives, which are likely to help it in staying ahead of the curve. Moreover, it enjoys a first-mover advantage in the Level 4 Cars race.

Reportedly, Waymo plans to start the company’s road testing of its driverless fleet in a new hub in Dallas, TX. The fleet will consist of Peterbilt 18-wheelers, complete with cameras, lidar and on-board computers.

The company also acquired Latent Logic, a British AI company that specializes in a form of machine-learning namely imitation learning, which is expected to make the simulation technology of Waymo more advanced and realistic. This, in turn, will strengthen the behavior prediction capability of Waymo.

At CES 2020, this Zacks Rank #3 company announced that Waymo vehicles have driven more than 20 million miles since its introduction in 2009. The feat was made possible, courtesy of its innovative AI skills and deep learning techniques.

Qualcomm’s Snapdragon Ride Does the Talking

The company expects its automotive TAM to be $30 billion by 2025, which comprises $25 billion for driving, $3 billion for training/development of deep neural networks and $2 billion for validation and testing.

Baidu Strives to Bridge the Gap

The service covers about 700 kilometers across China, and features about 100 pick-up and drop-off stations across several residential as well as business areas in the Yizhuang, Haidian, and Shunyi districts of China.

Reportedly, Apollo Go will launch 40 vehicles in Beijing. These robotaxis can be booked directly through the Baidu Maps mobile app or the Apollo website.

In addition to Beijing, the company made the Apollo Go robotaxi service available in China-based cities of Changsha and Cangzhou. This makes Baidu the only company with robotaxi pilot operations in multiple cities across China. Additionally, the company teamed up with Volvo to launch Level 4 vehicles in 2021.