Here's Why You Should Avoid Betting on Integer Holdings Now

The Zacks Rank #5 (Strong Sell) company — with a market capitalization of $1.93 billion — manufactures and develops medical devices and components primarily for original equipment manufacturers (OEMs), which depend on it to design, develop and produce intellectual property protected medical device technologies. Shares the company have lost 22.3% against the industry’s growth of 20.1% in a year’s time. Meanwhile, the S&P 500 Index has rallied 11% in the same timeframe. 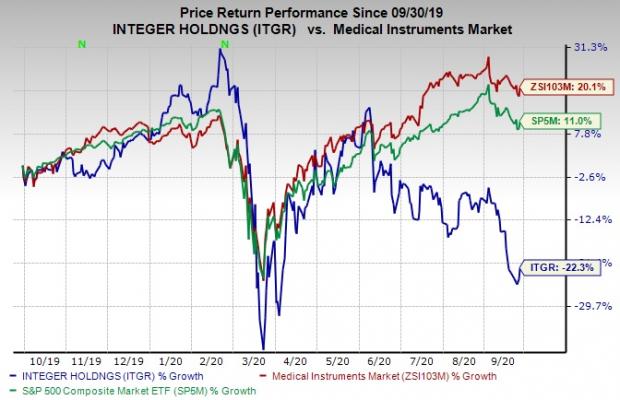 Integer Holdings generated a gross profit of $57.9 million in the second quarter, down 40.3% year over year. As a percentage of revenues, gross margin in quarter contracted 680 basis points (bps) to 24.1%.

Total operating income amounted to $9.2 million, which plunged 81.4% year over year. Operating margin in the quarter under review was 3.8%, down 1190 bps year over year.

For 2020, the Zacks Consensus Estimate for revenues is pegged at $1.08 billion, indicating a decline of 14.5% from the prior-year quarter. The same for earnings stands at $2.65 per share, suggesting a fall of 43.4% from the year-ago reported figure.

Merit Medical has a projected long-term earnings growth rate of 12%.

Thermo Fisher has an estimated long-term earnings growth rate of 15%.

CONMED has a projected long-term earnings growth rate of 10.8%.