Work related to the deal will be executed in Woburn, MA, and is expected to get completed by Sep 30, 2025.

Growing Significance of Missile Systems in the UAE

Over the last couple of years, the UAE has been facing missile threats from Iran and Yemeni Houthis. Therefore, the nation has been focusing on strengthening its arsenal of missiles and advanced weapons, of late. Currently, the Middle-East nation deploys missiles, such as the Patriot Advanced Capability 3 (PAC-3) Missiles, THAAD missile systems, MIM 23-Hawks, alongside other weapons.

To this end, it is imperative to mention that THAAD, manufactured by Lockheed Martin (LMT - Free Report) , is an integrated defensive missile system designed to protect against high-altitude ballistic missile threats. Notably, apart from this product line’s well-established market in the United States, THAAD enjoys strong demand flow from the UAE, along with other nations across the globe.

The UAE was also the first Gulf country to deploy the advanced AN/TPY-2 Surveillance Transportable Radar, which is the primary radar for the THAAD missile system, developed by Raytheon Technologies. Notably, as the UAE witnesses increasing demand for the THAAD and other missile systems, the demand for surveillance radars will also grow, thus benefiting Raytheon Technologies with contract flows like the latest ones.

In April, Raytheon Company completed its merger with United Technologies to form Raytheon Technologies, thus creating the world's most advanced aerospace and defense systems provider. The combined entity expects to introduce breakthrough technologies at an accelerated pace across high-value areas, such as hypersonics, directed energy, avionics and cybersecurity, in the days to come. The combined expertise will also be instrumental in providing advanced associated services for various weapon systems, including missiles. We believe that the latest merger will set a more robust foundation for the new company to acquire more such major contracts, similar to the latest one.

Shares of Raytheon Technologies have slumped about 57.9% in a year compared with the industry’s decline of 41.3%. 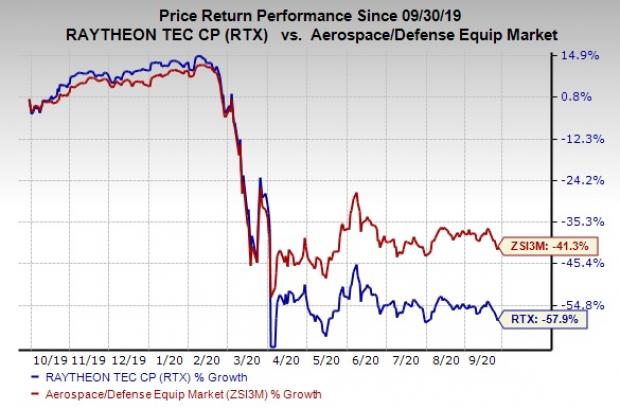 Teledyne Technologies delivered an average four-quarter earnings beat of 11.70%. The Zacks Consensus Estimate for 2020 earnings has risen 4.8% to $9.75 per share in the past 90 days.