Shell Puts Up Stakes in Malampaya Gas Project for Sale

Royal Dutch Shell PLC’s (RDS.A - Free Report) local unit is considering selling its 45% interest in the Malampaya gas-to-power project in the Philippines. Notably, the project is a major source of electricity for the country's main island of Luzon. The discovery of Malampaya’s natural gas was made by Shell in 1991 which fuels four power plants satisfying about 20% of the country’s electricity demands.

According to a company spokesperson, the planned divestment is part of an ongoing portfolio rationalisation by Shell to simplify and increase the flexibility of its business. Shell has assured an effortless handover of the asset to a credible buyer who would be well placed to optimize its value.  It is worth mentioning that the local unit Pilipinas Shell Petroleum Corp permanently shut down its refinery last month.

The move is in sync with its strategy to secure the long term sustainability of its business and grow in the new normal and energy transition. The decision comes in the wake of Shell looking to cut down cost of producing oil and gas by 40% to save cash and reinvest and focus more on renewable energy and power markets. The divestment plan came up about a year after Chevron (CVX - Free Report) agreed to sell its 45% interest in the project to Philippine oil and shipping group Udenna Corp.

Udenna Corp put forward their interest in acquiring Shell’s stake in the Malampaya project, in partnership with state-owned Philippine National Oil Company (PNOC) which already has a 10% interest in the project. The Udenna Group believes that Malampaya’s asset is of superior nature, contributing to the future welfare and energy security of the country.

Shell’s shares have underperformed the industry in the past six months. The stock has lost 26.5% compared with the industry decline of 13.2%. 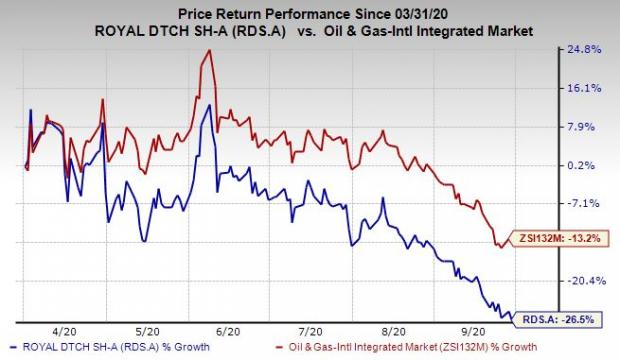 Over the past 60 days, the Zacks Consensus Estimate for Global Partners has been raised 1,245%. SilverBow Resources is expected to see earnings growth of 22.1% in 2021.

Dental Market Picks Up Pace Amid COVID-19: 3 Stocks to Watch