Off late, Lithia Motors has been on a spree to acquire high performing and rewarding dealerships. The recent buyout marks the addition of the 12th store to Lithia Motor’s existing network in the last two months.

In July-end, Lithia Motors announced the purchase of BMW of San Francisco, which followed the addition of DCH Subaru of Thousand Oaks, CA, in mid-July.Earlier in the month, Lithia had purchased Smolich Chrysler Jeep Dodge Ram and Nissan (NSANY - Free Report) dealerships in Bend, OR.

All of the expansions to Lithia’s network in 2020 are expected to generate more than $1.75 billion in annualized revenues.

The addition of Latham Ford dealership to the Lithia Family is likely to expand the company’s domestic foothold in the Northeastern United States, which will enhance the company’s services.

Recently, the auto retailer rolled out a national digital home channel — Driveway — focused on serving customers outside of a physical dealership. Driveway is the company’s e-commerce home solution, which enables customers to purchase or sell vehicles online and schedule at-home services. The company’s strategy of acquiring strong, high-performing franchises, alongside Driveway, is a key driver in boosting its profitability and growth prospects, by providing flexible and complete vehicle ownership solutions wherever, whenever and however consumers desire.

Lithia Motors is one of the leading automotive retailers of new and used vehicles, and related services in the United States. It offers tailored services complemented through its nationwide network. The buyout of Latham Fordaligns with the auto retailer’s proven success strategy of acquiring leading franchises.

Despite the economic recession faced by the auto industry due to the coronavirus outbreak, the company performed extremely well in second-quarter 2020. It delivered earnings of $3.72 per share, up 26% from the year-ago quarter’s level. The company even reported strong preliminary third-quarter results with expected net income per diluted share in the range of $6.10 to $6.40, reflecting an increase of 68-76% from the year-ago period’s $3.64 per share.

Shares have surged 83% year to date compared with the industry’s rise of 23.5% over the same period. 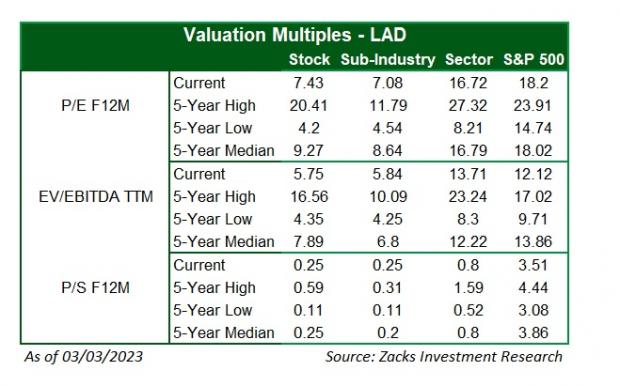 3 Reasons Why You Should Add Hibbett to Your Portfolio Now