In the past week, the U.S. telecom stocks have witnessed a roller-coaster ride, mirroring the broader benchmark index as the Trump administration continued to put pressure on China-based firms by enforcing various trade restrictions. The government also remained firm in its stance to remove Chinese apps from U.S. mobile app marketplaces and even sought to appeal against the federal court decision regarding the same. However, continued investments by leading carriers to increase their fiber footprint in rural areas to bridge the digital divide have allayed some negative vibes and seemed to infuse confidence in the beleaguered sector.

Despite ongoing negotiations to iron out the fine prints of the TikTok deal, several issues still remained unresolved, bringing an element of uncertainty within the sector. These include concerns related to data security, Chinese ownership in the new TikTok Global and a purported education fund. With Presidential elections round the corner, the deal is likely to progress at a snail’s pace, risking its completion within the Nov 12 deadline.

The industry woes were further compounded by the fact that the U.S. Justice Department was reportedly appealing against a federal court decision that stayed a government ban that restricted popular Chinese app WeChat from being downloaded from U.S. app stores. Notably, the U.S. Commerce Department sought to ban WeChat as it was allegedly being used as cyber espionage tool to gain access to sensitive U.S. data. However, U.S. Magistrate Judge Laurel Beeler refuted the charges and delayed the restrictions citing users’ First Amendment rights. With a legal fight in the cards, the industry justifiably appeared a bit jittery.

Meanwhile, China-based leading chipmaker Semiconductor Manufacturing International Corporation has undertaken “preliminary exchanges” with the U.S. Bureau of Industry and Security pertaining to the export restrictions imposed on it. In order to minimize the adverse impact on its supply chain mechanism leading to likely production cut, the company is working in unison with local regulatory compliance authorities and expects to iron out the security concerns at the earliest.

In addition, healthy infrastructure investments by telecom firms, both large and small, to boost the rural fiber coverage have brought a renewed enthusiasm within the sector. Rural customers are increasingly looking at their connection's flexibility and network speeds, rather than just the reliability and price, amplifying the demand for more reliable wired Internet connections. This, in turn, has led to a significant increase in new LTE fixed wireless Internet service in rural areas from leading telecom firms like Verizon Communications as it expanded rural coverage in 189 markets in 48 states.

Regarding company-specific news, 5G deployment, collaboration and product launches took the center stage over the past five trading days.

1.     Ericsson (ERIC - Free Report) has been on a tear when it comes to 5G network technology. The Sweden-based telecom equipment provider currently has 111 commercial 5G agreements with communication service providers, of which 60 are publicly announced. In fact, it has 65 live 5G networks in 33 countries.

2.     Nokia Corporation (NOK - Free Report) has reached 100 5G contracts with communications service providers, marking an important achievement in the highly competitive market. The Finland-based telecom equipment provider has an aggregate of 160 5G engagements with operators, from deals to paid trials. It currently has 34 live 5G networks, both public and private.

The company secured 17 new 5G deals in the third quarter of 2020, which underscores its progress in strengthening the mobile radio product portfolio. Nokia has been developing its 5G portfolio, strengthening AirScale and advancing the capabilities of its ReefShark chipset. It aims to accelerate product roadmaps and cost competitiveness through additional 5G investments in 2020.

The partnership comes as a boon to service providers, especially at a time when customers are getting increasingly dependent on virtual connectivity. Also, it will augment network flexibility and deliver high-quality Internet with the help of ADTRAN’s high-end network implementation services. Markedly, the alliance will help OptiComm to achieve Internet speeds of up to 10Gbps.

4.      Motorola Solutions, Inc. (MSI - Free Report) has introduced an innovative cloud-based service for mission critical environments — CommandCentral Citizen Input. This solution is part of Motorola’s avant-garde CommandCentral software suite, which has been designed to protect first responders and citizens for the enhancement of public safety infrastructure.

The CommandCentral Citizen Input is an industry-leading application that aids public-safety answering points (PSAPs) to combine data and improve the safety of critical personnel, even under stressful conditions. The solution is incorporated with VESTA 9-1-1 and CallWorks Call Station call handling platforms that facilitates flexible deployment of CommandCentral Citizen Input across the United States to render faster responses and enhance situational awareness. Apart from safeguarding the call handling investments, it enables citizens to send photographs and videos to the PSAP under permission-based and controlled procedures.

5.      BlackBerry Limited (BB - Free Report) has unveiled a new unified global partner program that will enable customers to differentiate their business while driving revenues with utmost flexibility. The program is a combination of BlackBerry’s Cylance Partner Programs and Enterprise Partner Program. Touted as an ideal platform for enterprise customers, it provides a plethora of avant-garde cybersecurity and endpoint management options.

Through the program, more than 2,200 BlackBerry distribution partners will have access to BlackBerry’s entire portfolio. The program has been designed with an integrated sales portal that will provide direct access to streamlined tools and resources on a real-time basis. This feature will help in maintaining business continuity while bolstering go-to-market efforts of the partners. 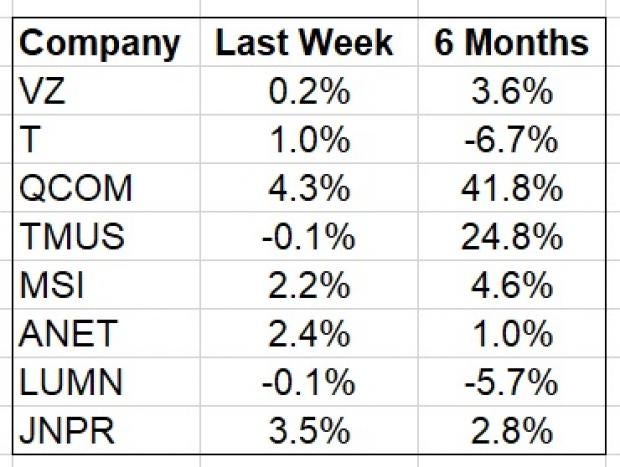 In the past five trading days, Qualcomm has been the best performer with its stock up 4.3%, while both T-Mobile and Lumen declined 0.1%.

Over the past six months, the Zacks Telecommunications Services industry has rallied 3.7% and the S&P 500 has gained 23%. 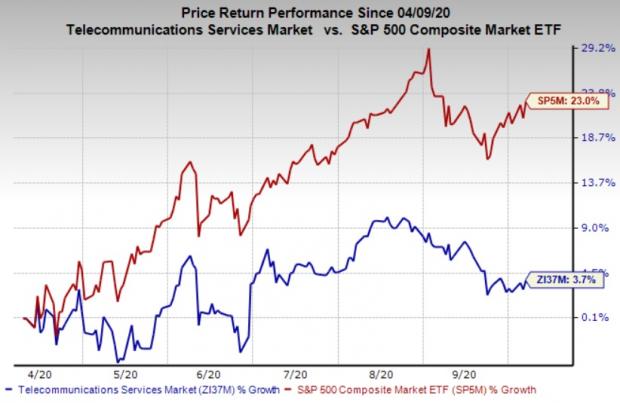 In addition to the 5G deployments and product launches, all eyes will remain glued to how the TikTok saga unfurls and whether President Trump gives a go-ahead to the transaction or seeks to gain a political mileage out of it.