Sunrun Acquires Vivint Solar Creating a Valuation of $22B

Sunrun Inc. (RUN - Free Report) has recently completed its acquisition of Vivint Solar, following the approval by regulators and stockholders of both companies. The deal was initially announced on Jul 6, 2020.

Vivint Solar’s stockholders are now entitled to receive 0.55 shares of Sunrun common stock for each share of the former's stock owned, immediately before the consummation of the acquisition. Vivint Solar will operate as a Sunrun company for the immediate future and will later be integrated into the Sunrun organization, over the coming quarters.

Rationale Behind the Planned Acquisition

In the United States, residential solar has reached only 3% penetration to date, which reflects ample scope for growth, going ahead. Impressively, in September, Wood Mackenzie forecasted 37% growth in the nation’s solar installations by the end of this year. This forecast is primarily driven by the strong performance of the utility-scale segment, which is expected to account for more than 18 GW of new installations by the end of 2020. Considering such growth prospects of the U.S. residential solar market, the acquisition made by Sunrun will enable it to expand footprint in the aforementioned market, reduce spending on technology systems, scale proprietary racking technology and improve sourcing capabilities within combined supply chains.

How Will the Acquisition Benefit Sunrun?

With the acquisition of Vivint Solar, Sunrun has firmly established its position as the leader in home solar and energy services across the United States. By adding Vivint Solar to its portfolio, Sunrun now owns more than 3 Gigawatts (GW) of solar energy capacity and more than 500,000 customers worldwide.

This acquisition has further resulted in creating an enterprise value of approximately $22 billion. Going forward, Sunrun expects to deliver estimated annual cost synergies valued at $90 million, which in turn will generate enhanced value creation for its customers and shareholders from a larger base of combined solar and battery assets.

Shares of Sunrun have soared 417.2% in the year-to-date period compared with the industry’s 171% growth. 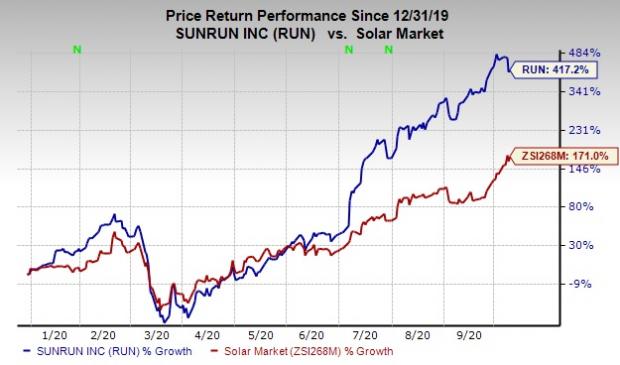 Canadian Solar delivered a positive earnings surprise of 28.26%, on average, in the trailing four quarters. It has a long-term earnings growth rate of 32%.

SolarEdge delivered a positive earnings surprise of 13.75%, on average, in the trailing four quarters. It has a long-term earnings growth rate of 25%.

SunPower delivered a positive earnings surprise of 185.56%, on average, in the trailing four quarters. It has a long-term earnings growth rate of 34.5%.

Choice Hotels or Extended Stay: Which is a Better Hotel Stock?