PPG Industries Inc. (PPG - Free Report) is set to release third-quarter 2020 results after the closing bell on Oct 19. The paint giant’s results will likely reflect the benefits of its cost-control initiatives and improved end-market demand.

PPG Industries beat the Zacks Consensus Estimate for earnings in two of the trailing four quarters while missed twice, the average surprise being roughly 13.1%. The company posted an earnings surprise of around 52.3% in the last reported quarter.

Shares of the company are up 13.1% over the past year compared with its industry’s 7.9% rise. 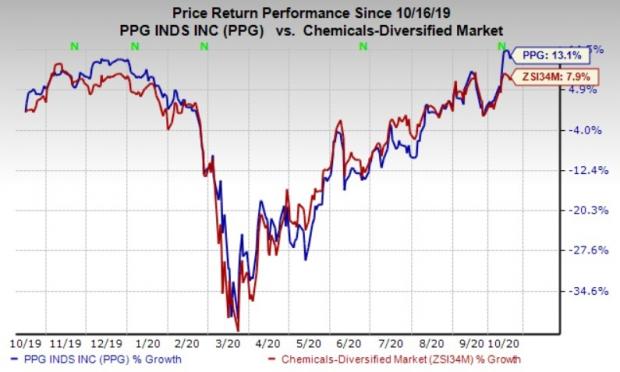 Our proven model predicts an earnings beat for PPG Industries this time around. The combination of a positive Earnings ESP and a Zacks Rank #1 (Strong Buy), 2 (Buy) or 3 (Hold) increases the chances of an earning beat.

Earnings ESP: Earnings ESP for PPG Industries is +7.53%. The Zacks Consensus Estimate for earnings for the third quarter is currently pegged at $1.71. You can uncover the best stocks to buy or sell before they’re reported with our Earnings ESP Filter.

PPG Industries envisions its total sales volume for the third quarter to be down around 5% year over year.

The Zacks Consensus Estimate for revenues for PPG Industries for the to-be-reported quarter stands at $3,587 million, suggesting an expected year-over-year decline of 6.2%.

PPG Industries is also actively managing costs and is also implementing appropriate pricing actions amid a challenging business environment. It remains focused on improving its cost structure and recovering margins through price increases. Benefits of these initiatives might reflect on the company’s bottom line in the September quarter. PPG Industries expects $30-$35 million in cost savings from its restructuring programs in the third quarter.

The company is also taking steps to grow business inorganically through value-creating acquisitions. Strategic buyouts (including Industria Chimica Reggiana and Dexmet) are likely to have contributed to its sales in the third quarter.

Agnico Eagle Mines Limited (AEM - Free Report) , scheduled to release earnings on Oct 28, has an Earnings ESP of +14.25% and carries a Zacks Rank #1. You can see the complete list of today’s Zacks #1 Rank stocks here.

Newmont Corporation (NEM - Free Report) , scheduled to release earnings on Oct 29, has an Earnings ESP of +0.97% and carries a Zacks Rank #2.

Eastman Chemical Company (EMN - Free Report) , scheduled to release earnings on Oct 29, has an Earnings ESP of +1.97% and carries a Zacks Rank #3.