Moderna Gets Consent to File MAA for Coronavirus Vaccine in EU

Moderna, Inc. (MRNA - Free Report) announced that it has received a confirmation from the European Medicines Agency (EMA) stating that the company is now eligible to file a marketing authorization application (MAA) for its COVID-19 vaccine candidate mRNA-1273 under the agency’s centralized procedure.

Following the EMA’s positive response, Moderna is looking to establish a Fast-Track framework for the rapid scientific advice, rolling review and an accelerated assessment of the vaccine.

The EMA gave the confirmation after Moderna filed a letter of intent seeking the consent to file the MAA following positive data from a preclinical viral challenge study and interim data from a phase I study. The phase I study evaluated the vaccine in healthy adults aged from 18 years to 55 years and older adults aged from 56 years to 70 years as well as above 71 years.

Notably, in Europe, Moderna is working with strategic manufacturing partners, namely Lonza of Switzerland and ROVI of Spain for fill-finish and manufacturing of the vaccine candidate. The company is ramping up the global manufacturing activity and is looking to deliver around 500 million doses of mRNA-1273 per year and up to 1 billion doses annually, beginning next year.

Shares of Moderna have skyrocketed 291.4% so far this year compared with the industry’s increase of 3.1%. 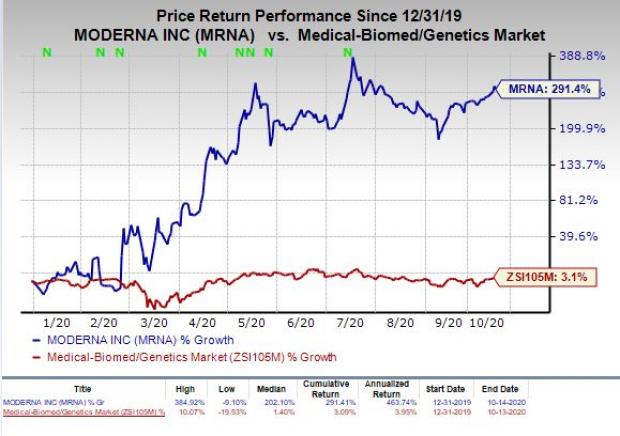 We note that in July, Moderna initiated the phase III study COVE on mRNA-1273. The company enrolled 28,618 participants of the total 30,000 in the study as of Oct 9, 2020. More than 22,194 volunteers were administered the second dose. The company is also on track to sign agreements with different countries for the potential supply of mRNA-1273 following its approval.

Moderna is developing mRNA-1273 in collaboration with National Institutes of Health (NIH). The company already initiated a rolling submission for mRNA-1273 to Health Canada.

Meanwhile, earlier this month, a Financial Times article reported that Moderna is unlikely to file a regulatory application seeking the emergency use authorization (EUA) for mRNA-1273 before the U.S. presidential elections scheduled on Nov 3.

Per the company’s CEO, it will not be able to file for an EUA due to the FDA guideline, which states that at least half of the study enrollees need to undergo two months of screening following their final injection before applying for the EUA.

However, there are other companies developing a vaccine for COVID-19 that are currently in late-stage studies, which include AstraZeneca (AZN - Free Report) /Oxford University, Pfizer (PFE - Free Report) /BioNTech (BNTX - Free Report) and J&J.