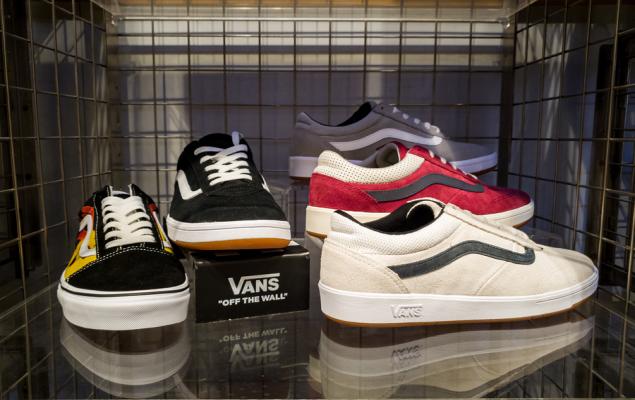 Nonetheless, it provided the outlook for fiscal 2021 based on encouraging business trends due to the reopening of almost all stores across all regions. Moreover, it is particularly gaining from strong business performance in digital and across China.

Notably, the company continued to execute its store-reopening plans during the fiscal second quarter, which slightly aided results. It had nearly all its stores operational in the reported quarter in the EMEA and APAC regions, including Mainland China. Moreover, it had about 95% of its stores open in North America at the end of the fiscal second quarter, following the reopening of nearly 75% stores in the region as of the end of the first quarter.

Moreover, the company reopened several other stores in North America in the fiscal second quarter, with nearly all stores in the region now operational. Moreover, its wholesale customers in APAC, North America and EMEA have re-opened most of their retail stores. Additionally, its supply chain and distribution centers remained operational during the quarter.

Shares of the company rose 1.8% during pre-market trading on robust business trends and strong fiscal second-quarter earnings results. The Zacks Rank #3 (Hold) company has gained 30.2% in the past three months compared with the industry’s growth of 18.5%. 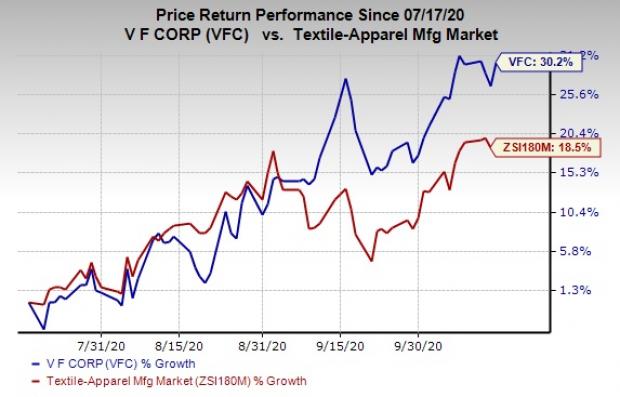 V.F. Corp’s reported adjusted earnings per share of 67 cents were significantly below adjusted earnings of $1.20 earned in the year-ago quarter. However, the bottom line beat the Zacks Consensus Estimate of 51 cents.

Revenues at the Active segment declined 15% to $1,200.2 million (down 16% in constant-currency basis). This included a 10% decline (11% decline in constant dollars) for the Vans brand.

Other revenues were $0.2 million compared with $18.1 million reported in the year-ago quarter.

V.F. Corp ended second-quarter fiscal 2021 with cash and cash equivalents of $1,877.4 million, long-term debt of $5,679.4 million, and shareholders’ equity of $2,945.2 million. Additionally, it had $2.23 billion remaining under its revolving credit facility. Inventories were down 10% at the end of the fiscal second quarter.

In the reported quarter, the company returned $186 million to shareholders through dividend payouts. As part of its liquidity-preservation actions amid the coronavirus outbreak, it previously suspended its share-repurchase program on a temporary basis. Currently, it has $2.8 billion remaining under its current share-repurchase authorization.

Concurrent to the earnings release, the company hiked its quarterly dividend by 2% to 49 cents per share. This marks its 48th consecutive annual dividend hike. The increased dividend rate is payable Dec 21 to shareholders of record as of Dec 10.

Encouraged by the year-to-date results, which exceeded expectations, and signs of stabilization and strength across all facets of business, the company outlined its outlook for fiscal 2021. Though it expects the uncertainties regarding the coronavirus pandemic to remain, it anticipates no further deterioration in its current business trends.

For fiscal 2021, it predicts revenues of $9 billion, suggesting a decline of 14% on an adjusted basis. The company’s revenue view is based on expectations of achieving low-single-digit growth in the second half of fiscal 2021 as it expects its business to return to growth in the fiscal fourth quarter.

It anticipates adjusted earnings per share of at least $1.20, which will likely decline 55% year over year and 56% in constant currency. The company expects to generate adjusted free cash flow of more than $600 million in fiscal 2021.

Under Armour, Inc. (UAA - Free Report) has a long-term earnings growth rate of 10.1% and a Zacks Rank #2 (Buy) at present. You can see the complete list of today’s Zacks #1 Rank stocks here.

Kontoor Brands, Inc. (KTB - Free Report) has a long-term earnings growth rate of 3.5%. The company currently has a Zacks Rank #2.