Including one-time items, earnings per share improved 17% year over year to $1.59 in the reported quarter.

Net sales in the quarter came in at $3,167 million, up from the year-ago quarter’s $3,084 million. The top line increased on solid beverage-can and food-can volumes, partly offset by the pass through of lower material costs. The reported figure also beat the Zacks Consensus Estimate of $3,060 million.

Selling and administrative expenses declined 2.6% year over year to $152 million. Segment operating income increased 16.7% year over year to $461 million during the September-end quarter. Operating margin came in at 14.6% compared with the 12.8% recorded in the prior-year quarter.

Net sales in the Americas Beverage segment came in at $960 million, up 15% year over year. Segment operating profit jumped 44% year over year to $193 million.

Revenues in the Transit Packaging segment totaled $511 million compared with the year-ago quarter’s $564 million. Operating profit was down 2.7% year over year to $72 million.

Crown Holdings had cash and cash equivalents of $613 million at the end of the reported quarter compared with the year-earlier quarter’s $339 million. The company generated $309 million cash in operating activities during the first nine months of 2020 compared with the $201 million witnessed in the comparable period in 2019.

As of the July-September quarter’s end, Crown Holdings’ long-term debt decreased to $8,039 million from $8,042 million as of end of the prior-year quarter.

The company plans to initiate a quarterly dividend of at least 20 cents per share. It will make the first payment in the first quarter of 2021.

Crown Holdings now expects fourth-quarter adjusted earnings per share (EPS) between $1.22 and $1.27. For the current year, the company now expects adjusted EPS in the range of $5.65 to $5.70. Management projects adjusted free cash flow of approximately $550 million and capital expenditures of $600 million for 2020.

The company’s products are significant part of the food and beverage supply chains, and also provide critical support to the transportation industry. It is focused on ensuring that its manufacturing facilities across the globe remain operational while continuing to meet the evolving customer demand by delivering high quality products.

Crown Holdings’ shares have gained 18.3% over the past year compared with the industry’s growth of 24.8%. 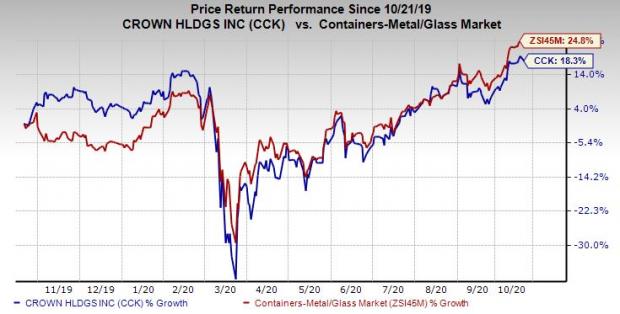 Sealed Air has a projected earnings growth rate of 3.9% for the current year. Shares of the company have gained 2.1% over the past year.

Lawson Products has an estimated earnings growth rate of 3.4% for 2020. The company’s shares have gained 13.9% in a year’s time.

Fortune Brands has an expected earnings growth rate of 6.9% for the ongoing year. The stock has appreciated 55.6% in the past year.