Pioneer (PXD) in Talks to Buy Parsley: What You Should Know

The all-stock acquisition deal is expected to be completed by month end, as reported by the people familiar with the matter to the Wall Street Journal. A big $14.8-billion upstream company, Pioneer’s acquisition of Parsley Energy — a $4.3-billion company — will likely lead to the creation of one of the biggest producers in the famous Permian Basin. Earlier this year, Parsley Energy acquired smaller rival Jagged Peak Energy in an all-stock deal worth $1.8 billion.

Now, a question may arise whether Pioneer’s balance sheet can support such an acquisition. At the end of second-quarter 2020, the cash balance totaled $180 million. Long-term debt summed $2,054 million, reflecting a debt to capitalization of 15.7%. The upstream energy player’s debt to capitalization has been persistently lower than the industry over the past few years, reflecting considerably lower debt exposure. Despite an unfavorable business scenario owing to coronavirus-induced dented energy demand, the company is capable of clearing long-term debt with the cash balance and $1.5 billion of credit facilities.

Parsley Energy’s total debt is currently around $3.4 billion, with only $159 million in cash & cash equivalents. Importantly, the company's debt to capitalization as of the end of the second quarter was 44.9%, deteriorating from 42.3% three months ago.

Pioneer’s shares have increased 18.5% in the past six months compared with 13.2% rise of the industry it belongs to. The company currently has a Zacks Rank #3 (Hold). You can see the complete list of today’s Zacks #1 Rank (Strong Buy) stocks here. 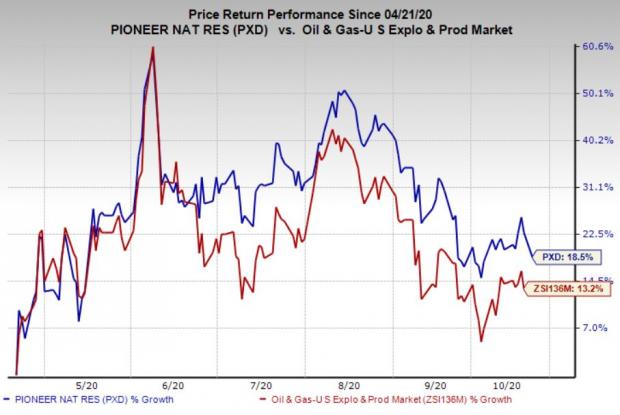 Here's How Carter's (CRI) Looks Just Ahead of Q3 Earnings