What's in the Cards For Patterson-UTI (PTEN) in Q3 Earnings?

The Zacks Consensus Estimate for the to-be-reported quarter’s loss is pegged at 61 cents and that for revenues is pegged at $198.61 million.

Against this backdrop, let’s analyze the factors that are expected to have impacted the company’s performance in the September-end quarter.

Patterson-UTI’s cost-reduction efforts have been raising investors’ optimism. The company, which closed Canadian drilling operations in the second quarter, forecasts full-year capital expenditure at $140 million, 60% below the 2019 spending of $348 million. These cost-saving measures are expected to have driven the company’s third-quarter earnings and cash flows higher.

On the flip side, Patterson-UTI’s Contract Drilling and Pressure Pumping segments are likely to have underperformed in the third quarter. The Zacks Consensus Estimate for Patterson-UTI’s third-quarter revenues from the Contract Drilling segment is pegged at $105 million, suggesting a 66.9% decline from $317 million reported in the corresponding quarter of 2019. Moreover, the Zacks Consensus Estimate for the company's third-quarter revenues from the Pressure Pumping segment is pegged at $65 million, indicating a 68.9% drop from the year-ago reported figure of $209 million.

Our proven model does not conclusively predict an earnings beat for Patterson-UTI this season. The combination of a positive Earnings ESPand a Zacks Rank #1 (Strong Buy), 2 (Buy) or 3 (Hold) increases the chances of beating estimates. But that’s not the case here. You can uncover the best stocks to buy or sell before they’re reported with our Earnings ESP Filter.

In the last reported quarter, Patterson-UTI reported an adjusted net loss per share of 56 cents, narrower than the Zacks Consensus Estimate of a loss of 58 cents. The outperformance reflects better-than-expected results from the Contract Drilling segment as lower costs helped prop up margins. In particular, average rig cost per day in its largest unit fell to $11,690 in the third quarter from $14,030 a year ago.

However, the bottom-line loss was wider than the year-earlier quarter's loss of 17 cents due to a free fall in U.S. drilling activity.

Patterson-UTI’s sales though declined 62.9% from the year-ago quarter.

As far as its earnings surprises are concerned, this Houston, TX-based oilfield services company outpaced the Zacks Consensus Estimate in three of the trailing four quarters, while missing the same in the remaining quarter, the average surprise being 1.3%. This is depicted in the graph below: 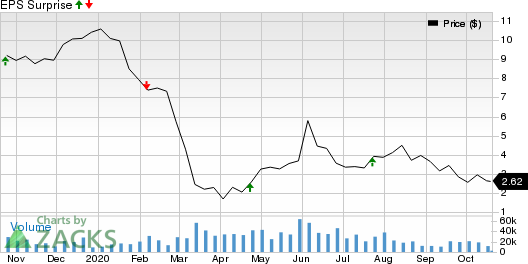 While earnings outperformance looks uncertain for Patterson-UTI, here are some firms worth considering from the energy space on the basis of our model, which shows that these have the perfect combination of ingredients to deliver a beat this reporting cycle:

Parsley Energy, Inc. has an Earnings ESP of +65.19% and is a #3 Ranked player, currently. The firm is scheduled to release earnings results on Oct 28.

Oceaneering International, Inc. (OII - Free Report) has an Earnings ESP of +33.91% and a Zacks Rank of 3, currently. The company is scheduled to release earnings results on Oct 28. You can see the complete list of today’s Zacks #1 Rank stocks here.

Concho Resources Inc. has an Earnings ESP of +0.39% and is Zacks #3 Ranked, currently. The firm is scheduled to release earnings results on Oct 28.

Driverless Race Accelerates: Who is Leading the Game?