The biotech sector was in focus in the past week with earnings update from Biogen (BIIB - Free Report) and a few regulatory and other pipeline updates from most of the big companies in this space.

Biogen Beats on Q3 Earnings and Sales, Down on Lower Guidance:  Biotech giant Biogen reported third-quarter 2020 earnings per share of $8.84, which comprehensively beat the Zacks Consensus Estimate of $8.06. While sales of $3.38 billion were down 6% from the year-ago quarter due to lower sales of multiple sclerosis (MS) drug, Tecfidera, and spinal muscular atrophy (SMA) drug, Spinraza, it marginally beat the Zacks Consensus Estimate of $3.35 billion. Tecfidera sales declined 15% to $953 million in the quarter hurt by the launch of multiple generic products in the United States. Sales of key SMA drug, Spinraza, declined 10% year over year to $495 million. Importantly, Biogen lowered its sales and earnings guidance for the year due to expected erosion from Tecfidera generics. The slump in sales of Tecfidera and the reduction in 2020 guidance disappointed investors.

Vertex Down on Halt of AAT Study: Shares of Vertex Pharmaceuticals (VRTX - Free Report) declined after it announced that it has stopped dosing and will discontinue the phase II study on its investigational oral small molecule corrector, VX-814, for the treatment of alpha-1 antitrypsin deficiency (AATD). The decision to stop dosing in the study was based on the safety and pharmacokinetic (PK) profile of VX-814 observed in the study to date. The study was being conducted to evaluate the ability of VX-814 to increase functional levels of alpha-1 antitrypsin, a protein mainly produced by the liver, over 28 days of dosing. However, elevated liver enzymes were observed in several patients, which were more than normal limits. Meanwhile, exposure levels were low as observed in the analysis of PK data from the study, which the company believes would make it impractical to safely reach targeted exposure levels and thus meaningful increases in AAT levels.

Regeneron's Ebola Treatment Gets FDA Nod: Regeneron (REGN - Free Report) announced that the FDA has approved its triple antibody cocktail, REGN-EB3, under the brand name, Inmazeb, for the treatment of the infection caused by Zaire ebolavirus in adult and pediatric patients. The patient population includes newborns of mothers who have tested positive for the infection. Inmazeb (atoltivimab, maftivimab and odesivimab-ebgn) is a novel anti-viral antibody medicine.  The drug showed superiority compared to other investigational agents — ZMapp and remdesivir — with respect to mortality in the PALM study. Per Regeneron, this is the first time the FDA has approved a treatment specifically for Ebola. Regeneron will deliver a significant number of Inmazeb treatment doses over the course of six years to the Biomedical Advanced Research and Development Authority (BARDA), as part of an agreement announced in July 2020.

Separately, Regeneron and Sanofi announced that the European Medicines Agency's (EMA) Committee for Medicinal Products for Human Use (CHMP) has adopted a positive opinion for Dupixent (dupilumab), which recommends extension of the approval in the European Union (EU) to include children aged 6 to 11 years with severe atopic dermatitis who are candidates for systemic therapy.

KTE-X19 is an autologous, anti-CD19 CAR T cell therapy, which is an individualized method of treatment that harnesses the body’s own immune system to target cancer cells. The CHMP recommendation was based on the positive benefit-risk for KTE-X19 as demonstrated by the safety and efficacy results of the ZUMA-2 trial. The recommendation will now be reviewed by the European Commission and the final decision is expected in the coming months.

BioSpecifics Surges on Endo Deal: Shares of BioSpecifics surged after it entered into a definitive merger agreement with Endo International, whereby the latter will acquire the former for an estimated equity value of approximately $658.0 million ($540.0 million in enterprise value net of cash on hand), or $88.50 per share in cash. The transaction is anticipated to close during the fourth quarter of 2020. Endo has a strategic relationship with BioSpecifics since 2004, whereby the latter receives a royalty stream from the former. The royalty is related to Endo's collagenase-based therapies, which currently include Xiaflex indicated for the treatment of Dupuytren's contracture and Peyronie's disease, and the recently approved Qwo, an injectable treatment for cellulite. Qwo is expected to be launched next year.

CRISPR Down on Cancer Study Data:  Shares of CRISPR Therapeutics (CRSP - Free Report) are down after it announced top-line results from its ongoing phase I CARBON trial evaluating the safety and efficacy of CTX110, its wholly-owned allogeneic CAR-T cell therapy targeting CD19+ B-cell malignancies. In the study, 50% (2/4) of patients enrolled showed complete response (CR) rate at three months in the dose level 3 (DL3) cohort and both responders remained in CR. While CTX110 showed dose-dependent efficacy and response rates that are comparable to the early autologous CAR-T trials, the death of a participant receiving the dose level 4 was disappointing. 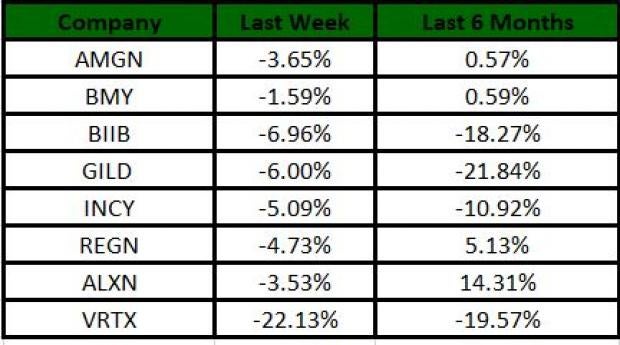