The election is right around the corner and investors seem a tad discouraged that the second stimulus bill likely won’t be passed until at least after November 3. Meanwhile, the coronavirus continues to hamper some economic activity, especially in the travel and hospitality space. Yet taking a broader view, the economic recovery is well underway.

Weekly jobless claims fell last week to a seasonally adjusted 787,000. Meanwhile, the Labor Department said Thursday that figures for the first two weeks of the month were revised lower, with claims for the week ended Oct. 3 coming in at the lowest level since mid-March. Strong U.S. home-buying data also rolled in on Thursday, with sales of previously owned homes at a 14-year high in September—existing-home sales jumped 9.4% from August. 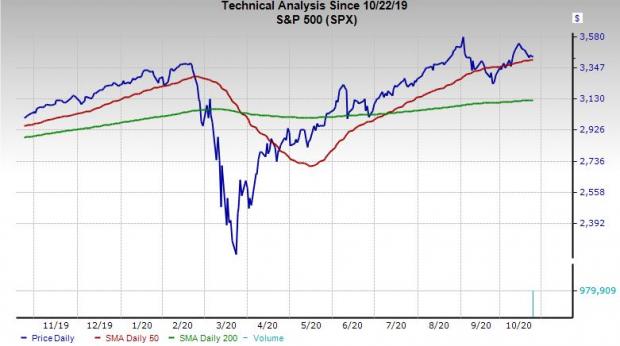 Plus, the overall S&P 500 earnings picture continues to improve, and the interest rate environment will likely continue to help support stock prices. This means that despite all of the uncertainty and unknowns on the virus front, the broader fundamentals are showing bullish signals (also read: Exploring the Improving Q3 Earnings Picture).

Looking ahead, investors with a longer-term horizon of a year or more might want to try to avoid timing the market. The practice can lead to buying high and selling low and missing out on some of the biggest market climbs. This past year is a great example of why trying to stay as exposed to the market as you can tolerate and afford is often be beneficial.

Let’s explore three diverse, top-ranked technology stocks that longer-term investors might want to consider buying and holding despite any near-term noise and volatility…

Nvidia has transformed from a GPU giant that mostly served the booming global gaming space into a powerhouse that’s set to grow for years, as it expands its reach within data centers, cloud computing, and artificial intelligence. NVDA then made a splash when it announced in September that it would acquire Arm Limited from Softbank (SFTBY - Free Report) for $40 billion—mostly in stock.

Arm is one of the most important behind-the-scenes companies in the market. It designs and licenses the basic blueprints of chips that consume the least amount of energy, which are used in roughly 90% of the world's smartphones. However, the biggest chip deal in history, which Nvidia hopes will create a global chip titan for the AI age, faces a tough road ahead, as it must get through regulatory approval in the U.S., China, and the U.K.

Nvidia’s bottom line revisions help it land a Zacks Rank #1 (Strong Buy) right now. The stock has soared 170% in the last year, against its industry’s 45%. Its valuation is a bit stretched, but investors have been willing to pay a premium for Nvidia for years.

Overall, the stock appears to be worth considering as a longer-term bet on secular tech trends from cloud computing to AI. NVDA stock is up around 10% in the last month and it’s set to release its Q3 results on November 18.

Salesforce’s subscription-based cloud software, which offers clients a range of tools and applications to help run everything from sales and e-commerce to marketing and analytics, had grown widely popular over the last decade-plus. Then the work-remote world highlighted the strength and importance of its business model, as part of the broader SaaS world that businesses, big and small, have come to depend on.

The cloud software powerhouse saw its stock price soar after it blew away estimates in late August. CRM has climbed 55% in 2020 vs. its industry’s 30%. This trend extends over the last five years, with Salesforce up 220%, against the Software-Services Market’s 112% expansion.

The stock currently rests roughly 12% off its early September highs, providing it room to grow. Salesforce also trades at a slight discount against Microsoft (MSFT - Free Report) in terms of forward sales, as it has for much of the last two years, and comes in not too far above its industry.

One of the newest Dow members saw its Q2 revenue jump 29%, while its adjusted earnings soared 120%. Zacks estimates call for Salesforce’s FY21 revenue to climb 21.5% to $20.77 billion, with FY22 projected to come in another 17.4% or $3.6 billion higher. CRM’s adjusted FY21 earnings are expected to jump 25%, and its earnings revisions have climbed to help it land a Zacks Rank #1 (Strong Buy).

Zoom is one of the stars of the coronavirus economy. More importantly, ZM has outperformed expectations as the world returns closer to normal and people cut back on personal Zoom calls. The reason is simple: ZM makes money from subscription-based paying customers that are still using its offerings non-stop in the current remote work and learning environment that will likely be here for a while, in some form.

Zoom, which went public in April 2019, was growing long before the virus, with fiscal 2020 sales up 88% for the period ended on January 31. ZM’s Q2 FY21 revenue then skyrocketed 355% as it continued to add business customers. And Zoom rolled out what it calls a Hardware as a Service line of devices that are aimed at professionals that want to beef up their remote capabilities.

Then its FY22 revenue is projected to climb another 32%, or $760 million higher, which is more than the $623 million it pulled in all of FY20. And ZM’s positive earnings revisions activity helps its land a Zacks Rank #1 (Strong Buy). It’s also worth pointing out that it has crushed our bottom-line estimates by at least 100% in the trailing four quarters.

Zoom shares have climbed 740% in the last year, including a 100% jump in the past three months. This seems to suggest that Wall Street understands that companies might remain in their current remote capacity, especially for many professional services firms in big cities. Plus, Zoom’s longer-term success could hinge on companies finding the work-from-home world relativity seamless. This could see them permanently cut back on rent, commercial real estate, and travel, which the pandemic could help normalize.