Microsoft (MSFT - Free Report) has lagged the broader tech space over the last six months and it’s fallen behind some of its big tech peers such as Amazon (AMZN - Free Report) and Apple (AAPL - Free Report) . This is a change of pace for MSFT, which had outpaced the larger group of FAANG stock for the past several years, until the coronavirus downturn.

Despite its recent underperformance, Microsoft stock is still up over 35% in 2020 and is built for the remote work world and is prepared to thrive in our cloud future. So is it time to buy MSFT stock with the company set to release its Q1 fiscal 2021 financial results on Tuesday, October 27?

MSFT’s Office offerings remain vital to businesses, students, and many others. Last quarter, its Office 365 Commercial revenue jumped 19%. The pandemic also highlighted the importance of its stay-at-home segments, such as Teams, which compete against Slack , Zoom Video (ZM - Free Report) , and others.

Meanwhile, the company’s gaming unit continues to grow, within the constantly expanding global gaming space. MSFT’s Xbox content and services revenue soared 65% in Q1 FY20 and its next-generation Xbox is due out this holiday season. And it recently increased its bet on the gaming industry with its $7.5 billion purchase of ZeniMax Media.

Microsoft’s consumer products space, which includes its Surface line of laptops and tablets, saw its overall revenue pop 14% last quarter, as people adapted to the new work and school environment. And the firm continues to make acquisitions, such as LinkedIn, GitHub, and other big names, as well as smaller purchases every year.

On top of all of that, and perhaps most importantly, Microsoft is a leader in the ever-expanding and vital cloud computing market, where it is a top player in the industry alongside Amazon Web Services. The company’s overall Q4 FY20 sales jumped 13% amid the height of the pandemic, with its Intelligent Cloud unit the top performer, up 17%, with Azure up 47%. 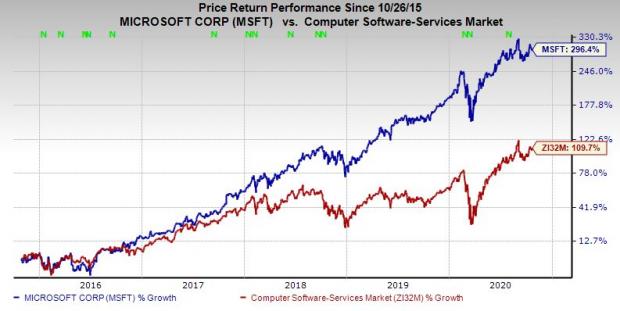 Looking back, MSFT’s revenue has now climbed by roughly 14% for three straight years, including FY20, with 7% top-line expansion in FY17. With this in mind, Microsoft’s upcoming Q1 FY21 revenue is expected to jump 8% to reach $35.67 billion, based on Zacks estimates. On the bottom line, its adjusted EPS figure is projected to climb 11% to come in at $1.53 per share.

Peeking further down the road, the historic tech firm’s full-year FY21 revenue is projected to climb 9% and another 11% in FY22, with its adjusted earnings projected to pop 10.5% and 12.6%, respectively.

Microsoft has also seen some positive longer-term revisions recently to help it grab a Zacks Rank #2 (Buy) at the moment. And the company boasts a great management team and consistently tops earnings estimates by a comfortable margin, including a 10% average beat over the trailing four quarters.

MSFT, which holds a “B” grade for Growth in our Style Scores system, last reported that it held around $137 billion in cash and equivalents. This gives it the ability to continue to make both small and large acquisitions. In mid-September, MSFT announced that it raised its dividend by 10%. The company’s 1.04% dividend yield tops the 10-year Treasury and Apple’s 0.72%.

The stock also trades at a discount against its industry in terms of forward earnings, as it has for years. MSFT’s discounted valuation comes despite the fact that it has destroyed its industry’s average over the past five years, up 300% vs. 109%. Microsoft has also matched Apple over this stretch and the stock is up 54% in the last 12 months.

As we touched on at the top, Microsoft has lagged its industry during the market’s comeback, up 23% vs. 33%. This could mean that MSFT is due for a bit of a resurgence, which could come if it’s able to impress Wall Street with its upcoming results and guidance. And long-term investors might want to consider adding MSFT to their portfolio because of its exposure to multiple growth areas of tech, especially cloud computing.

Microsoft stock rests about 7% off its highs, as of morning trading Friday. And it’s also worth noting that 18 of the 22 brokerage ratings that Zacks has for MSFT currently sit at “Strong Buy.”