The company delivered a negative earnings surprise of 3.03%, on average, in the trailing four quarters, missing estimates thrice and surpassing once. In the last reported quarter, A. O. Smith posted earnings of 45 cents, which beat the Zacks Consensus Estimate of 44 cents by 2.27%.

In the past three months, the company’s shares have gained 2% compared with the industry’s growth of 6.9%. 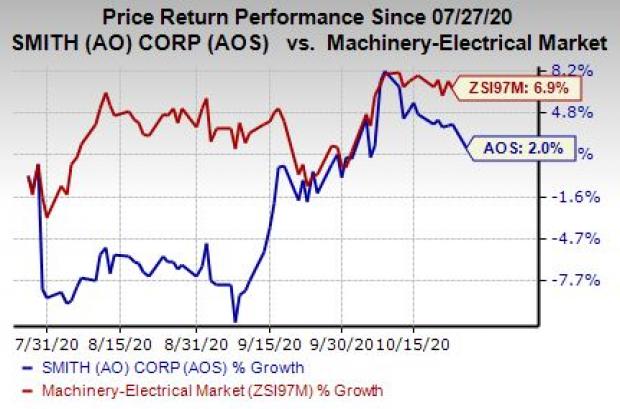 A. O. Smith is expected to have benefited from its strong position in the replacement market. Robust demand for water treatment products in the United States might have augmented the company’s top-line performance in the third quarter. Also, improvement in the effectiveness of the company’s direct-to-consumer channel is likely to have supported its top line.

Moreover, the company’s Water-Right business has enhanced its growth opportunities in the water treatment industry, especially in the wholesale and independent dealer array. Also, the business contributed to the second-quarter top line, a trend that likely continued in the third quarter as well. In addition, its continuous focus on investments in product developments, automation and production efficiency is anticipated to get reflected positively in the to-be-reported quarter results.

In addition, some of A. O. Smith’s actions, including cost-reduction and restructuring activities, are expected to have helped it maintain a healthy margin performance.

Further, given A. O. Smith’s diverse geographic presence, its operations have been subject to issues like unfavorable movement in foreign currencies, interest rate fluctuations and hyperinflation in some foreign countries. This might have hurt its business, particularly in China, in the to-be-reported quarter as well.

Amid this backdrop, the Zacks Consensus Estimate for revenues from A. O. Smith's North America segment is currently pegged at $498 million, indicating a 3.5% increase from the previous quarter, but a 3.3% decline from the year-ago reported figure. The consensus estimate for revenues from Rest of the World stands at $217 million, suggesting a 14.2% improvement from the previous quarter’s reported figure, but a 1.4% fall from the year-ago quarter.

Our proven model suggests an earnings beat for A. O. Smith this time around. The combination of a positive Earnings ESP and a Zacks Rank #1 (Strong Buy), 2 (Buy) or 3 (Hold) increases the odds of an earnings beat. You can uncover the best stocks to buy or sell before they’re reported with our Earnings ESP Filter.

Earnings ESP: The company has an Earnings ESP of +5.71% as the Most Accurate Estimate is pegged at 56 cents, higher than the Zacks Consensus Estimate of 53 cents.

Here are some other companies you may want to consider, as our model shows that these too have the right combination of elements to post an earnings beat this season:

Regal Beloit Corporation (RBC - Free Report) has an Earnings ESP of +3.24% and a Zacks Rank of 2, at present.