Revenues in the July-September quarter declined 25.3% year over year to $766 million. However, the revenue figure beat the Zacks Consensus Estimate of $757 million.

Selling, general and administrative expenses dropped 11% year on year to $109.8 million in the September-end quarter. Terex reported an operating profit of $36.5 million compared with the year-ago quarter’s $86.4 million. Operating margin came in at 4.8% compared with the 8.4% witnessed in the year-earlier period.

The Aerial Work Platforms (AWP) segment generated revenues of $445 million in the third quarter, down 29% from the year-ago quarter. The segment reported an operating profit of $13 million compared with the prior-year quarter’s $46 million.

The Material Processing (MP) segment’s revenues totaled $311 million, reflecting a year-over-year decline of 18.8%. The segment reported an operating income of $40 million, down 31% year over year.

Terex expects revenues in the fourth quarter to be similar to the first three quarters of the year, thanks to the current market conditions. The company undertook significant cost-reduction actions in order to align its cost structure with the current customer demand. It will continue being focused on managing its cost and working capital. Terex is expected to deliver solid free cash flow in the fourth quarter.

Terex's shares have appreciated 56.4% over the past six months, outperforming the industry’s growth of 31.7%. 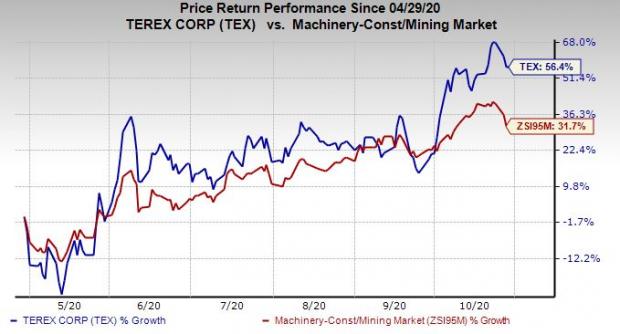 Pentair has a projected earnings growth rate of 2% for the current year. Shares of the company have gained 41.7% over the past six months.

Volkswagen (VWAGY) to Post Q3 Earnings: What's in the Offing?