GlaxoSmithKline plc (GSK - Free Report) reported third-quarter 2020 adjusted earnings of 92 cents per American depositary share, which beat the Zacks Consensus Estimate of 78 cents. However, adjusted earnings were down 8% year over year on a reported basis but up 1% at constant exchange rate (“CER”).

Quarterly revenues declined 8% on a reported basis and 3% at CER to $11.17 billion (£8.65 billion) due to disruption caused by COVID-19, particularly in the Vaccines business. The top line slightly missed the Zacks Consensus Estimate of $11.27 billion

Shares of Glaxo have declined 13.6% so far this year against the industry’s 1.1% increase. 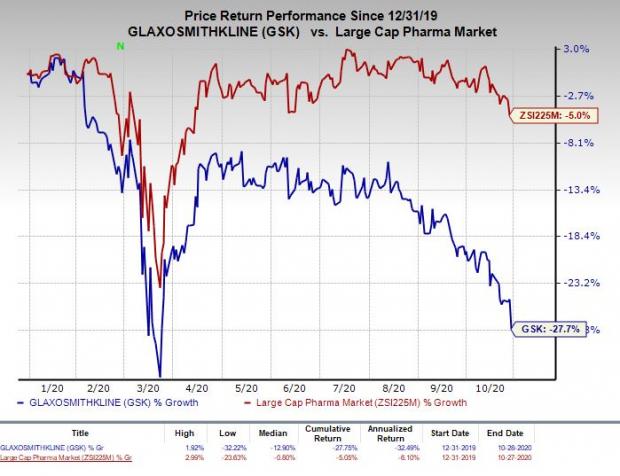 Sales in the United States were up 2%. Sales in European markets were down 6% at CER and 7% in International markets.

Respiratory sales were up 26% at CER mainly driven by increase in sales of Trelegy, Relvar/Breo and Nucala across all markets. Nucala sales were up 29% at CER during the quarter. Trelegy Ellipta sales surged 45% year over year driven by strong growth in all regions.

Relvar/Breo Ellipta registered growth of 34% in sales during the third quarter mainly driven by the U.S. market. Sales of the drug in the United States were up 70%, reflecting a stronger ICS/LABA market and the benefit of prior period RAR adjustment.

Sales of the dolutegravir franchise were flat in the U.S. market but up 4% in Europe. In international markets, sales were up 5% at CER. Please note that Glaxo markets Juluca in collaboration with J&J (JNJ - Free Report) .

Sales of Established Pharmaceuticals declined 18%, reflecting generic competition for Ventolin in the United States and pricing pressure for Flovent in the U.S. market.

Advair/ Seretide sales declined 8% year over year due to generic competition in all markets. Sales of Ventolin were down 18% during the quarter.

Sales of immuno-inflammation drugs like Benlysta rose 18% in the quarter, with U.S. sales growing 14%.

Sales of Pain relief and Oral health categories increased 8% and 5%, respectively, in the quarter. Sales of Vitamins, minerals and supplements category were up 67% in the third quarter. Digestive health and other category’s sales were up 15%. However, sales of Respiratory health declined 9%.

We note that the impact of COVID-19 was mixed for this segment. Vitamins, minerals and supplements brands continue to benefit from strong demand as consumers increasingly focus on health and wellness amid COVID-19. However, social distancing measures hurt Respiratory health brands, especially within cold and flu categories. The company stated that accelerated purchases in Oral health and in Pain earlier this year have largely been unaffected.

Sales from the Vaccines segment were down 9% at CER, primarily due to the adverse impact of the COVID-19 pandemic on Shingrix, Meningitis and Established vaccines. The impact was partially offset by strong demand for Influenza vaccine in the United States. However, the company stated on its third-quarter earnings call that recovery in vaccination rates was observed during the quarter. Adult immunization rates in the United States seemed to return to prior-year levels in the last month of the quarter.

Shingrix sales declined 25% in the reported quarter, primarily impacted by COVID-19 pandemic stay-at-home directives in the United States, which led to lower vaccination rates. However, the decline in the U.S. market was partially offset by strong demand in Germany and launch in China.

Bexsero sales decreased 11% while sales of Menveo were flat, reflecting lower demand across all regions.

Sales of influenza vaccine Fluarix were up 21%. Sales of Established vaccines were down 14% year over year.

Selling, general and administration (SG&A) costs decreased almost 7% at CER year over year to £2.48 billion. The decline in SG&A costs was led by benefits from restructuring and reduced variable spending due to COVID-19 related restrictions

Research and development (R&D) expenses declined 6% at CER to £1.05 billion, reflecting reduced spending in PRIMA study and for dostarlimab, as clinical studies are now complete.

Based on its current assessment of the COVID-19 impact, Glaxo maintained its previous adjusted earnings guidance of a decline in the range of 1% to 4% at CER year over year in 2020. However, the company said it expects to meet the lower end of the guidance.

Glaxo and Sanofi have collaborated to develop a vaccine for COVID-19 using their innovative technologies. The companies aim to start a phase III study by year-end. The companies have also signed supply agreements with the European Union, the United States government and other countries for the vaccine candidate.

Glaxo has also collaborated with Vir Biotechnology (VIR - Free Report) to develop a fully humanized anti-SARS-CoV-2 monoclonal antibody candidate,VIR-7831, for treating hospitalized COVID-19 patients. Initial data from a phase III study is expected by year-end. Another phase II/III study is ongoing on the same candidate as potential early treatment of COVID-19 patients who are at high risk of hospitalization.

Glaxo beat on third-quarter earnings while slightly missing sales estimates, reflecting disciplined cost control and strong commercial momentum in key growth products. The company’s new products in the Respiratory and Oncology segment, and two-drug HIV regimens performed well in the reported quarter. Meanwhile, sales of the company’s established drugs continued to decline. Moreover, immunization rates seem to have been improving in the United States, especially for Shingrix, suggesting recovery in Vaccine business going forward. However, loss of Advair sales due to generic competition and competitive pricing will continue to hamper revenues.

Meanwhile, the company remain on track with its plan to separate itself into two separate companies — one focusing on Biopharma and another on Consumer Health — by 2022 to deliver sustainable growth and returns to shareholders.