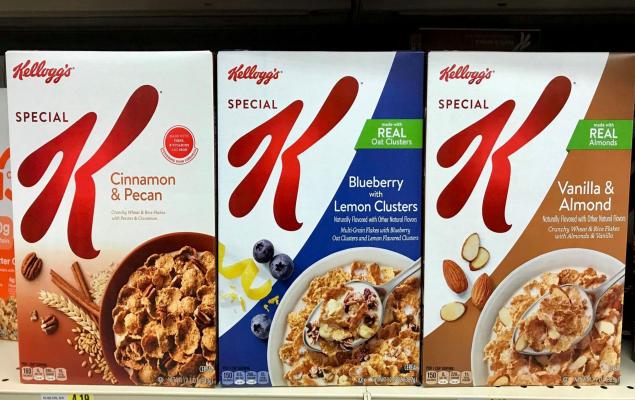 Adjusted earnings of 91 cents per share dropped 11.7% year over year (also on a constant currency or cc basis). The year-over-year decline resulted from a rise in consumer promotion investments, increased performance-based compensation and a greater adjusted effective tax rate, partly offset by reduced interest expenses and a rise in other income. Nonetheless, the bottom line came ahead of the Zacks Consensus Estimate of 88 cents.

The company delivered net sales of $3,429 million, which climbed 1.7% year on year and surpassed the consensus mark of $3,421 million. Adverse impacts of the divestiture of the company’s cookies, fruit snacks, pie crusts and ice-cream cone businesses (in July 2019), and currency headwinds were offset by robust organic sales growth in other businesses, resulting from pandemic-led increased buying.

Organic sales (excluding currency and divestitures) moved up roughly 5%. Management stated that demand for packaged foods owing to the pandemic-led higher at-home consumption remained high, though it moderated from the preceding quarter. This, in turn, fueled the company’s sales in retail channels (including solid growth in emerging markets) and helped it counter the declines in food sold in the away-from-home network.

Adjusted operating profit tumbled 9.7% to $400 million due to elevated advertising and consumer promotion investments, increased performance-based compensation, currency headwinds and the impact of last years’ divestitures. This was somewhat cushioned by higher sales and gross profit.

Sales in the North America segment amounted to $2,059 million, which remained flat year over year as divestiture impacts were countered by impressive growth in other businesses amid the pandemic. Sales grew 3% on an organic basis, depicting improvements in cereal, frozen foods and snacks. In fact, Kellogg gained market share in five out of six main categories in the United States. Adjusted operating profit fell 9% at cc due to a considerable rise in advertising and consumer promotion expenditure, divestiture impacts and high COVID-19 costs.

Revenues in the Europe segment totaled $552 million, up 4.7% year on year, including a favorable currency impact of about 4%. Further, sales rose roughly 1% on an organic basis, on strength in cereal and Pringles sales. This was somewhat mitigated by declines in portable wholesome snack sales due to lower demand for on-the-go foods and pack-formats amid the pandemic-led social distancing. Adjusted operating profit declined nearly 13% at cc.

Revenues in Latin America totaled $236 million, down 3% year on year on account of currency headwinds of 16%. Sales grew 13% on an organic basis on solid cereal demand in the modern trade network across the region, together with improvement in snack sales (especially in Brazil). Adjusted operating profit jumped about 30% at cc.

Revenues in the Asia, the Middle East & Africa segment totaled $582 million, up 7.3% year over year, including currency headwinds of more than 3%. Markedly, the company saw broad-based growth, including gains in Australia, Africa, the Middle East and Asia. Further, Kellogg’s sales increased across cereal, noodles and snacks. Sales improved approximately 11% on an organic basis. Adjusted operating profit was up 6% at cc.

Kellogg ended the quarter with cash and cash equivalents of $1,329 million, long-term debt of $7,000 million and total equity of $3,586 million. In the year-to-date period, the company has generated cash from operating activities of $1,593 million.

Cash flow from operating activities is now likely to be $1.8-$1.9 billion in 2020, up from $1.6 billion guided earlier. Capital expenditures are expected to be nearly $0.5 billion and cash flow is now estimated to be $1.3-$1.4 billion. Cash flow was projected to be around $1 billion earlier.

Organic sales in the ongoing year are now estimated to grow around 6%, up from the previous guidance of 5%. Adjusted operating profit is expected to climb about 2% at cc now against a 1% drop projected earlier.

Adjusted earnings per share are expected to grow about 2% now against a 1% dip estimated before. Adjusted operating profit and earnings will likely bear divestiture impacts.

This Zacks Rank #3 (Hold) stock has dropped 8.2% year to date compared with the industry’s decline of 5.3%.

Looking for Food Stocks? Check These

Lamb Weston (LW - Free Report) has a Zacks Rank #2 and a long-term earnings growth rate of 7%.

Flowers Foods (FLO - Free Report) , which also carries a Zacks Rank #2, has a trailing four-quarter earnings surprise of 8.2%, on average.