In the past week, the U.S. telecom stocks continued to mirror the broader benchmark indices and trended down with surging coronavirus cases clouding broad-based expectations of a speedy turnaround in the economy. The growth momentum further faded as the string of supplemental unemployment benefits and other stimulus previously approved by the Congress expired. To add to the woes, hopes of consensus on additional stimulus eroded, at least until the Presidential elections.

In order to thwart the hegemony of China’s hardware-based 5G model, leading U.S. telecom firms and other technology hotshots are pushing for a software-based approach to build an all-pervasive 5G network. This is likely to encourage the development of open radio access networks, or RAN, which power cellular technology. RAN is an essential element of a mobile telecommunication system that connects user devices such as computers, smartphones and tablets to the core part of a network. The O-RAN (open RAN) alliance is now urging the Trump administration to break away from proprietary telecom networks and embrace virtual telecom model to counter the increasing dominance of China-based firms like Huawei.

Following the footsteps of other European countries, Italy has debarred Huawei from supplying telecommunications equipment for its 5G core network citing security concerns. Moreover, Bulgaria has joined the U.S.-led international coalition against Huawei. Notably, the White House is seeking a ban on TikTok, WeChat and other Chinese apps that are allegedly being used as cyber espionage tools to gain access to sensitive American data. However, an appeals court recently rejected a government appeal seeking immediate ban of WeChat download from U.S. app stores. This has offered a temporary respite to WeChat that boasts an average of 19 million daily active users in the United States.

Meanwhile, the Federal Communications Commission (“FCC”) is set to vote on Nov 18 to offer a block of the 5.9 GHz spectrum band for wireless use. The spectrum earmarked for auto safety has mostly been unused and is now being considered to be made available to accommodate the increasing number of wireless devices. The FCC plans to transition the upper 30 MHz from the spectrum band for a different automotive communications technology called Cellular Vehicle-to-Everything, or C-V2X, and use the other 45 MHz for wireless use. While almost automakers have rejected the proposal, major telecom firms have backed it.

Core net income came in at $380 million or 43 cents per share compared with $397 million or 44 cents per share in the prior-year quarter. The bottom line beat the Zacks Consensus Estimate by 5 cents, delivering a positive surprise of 13.2%. Quarterly GAAP net sales increased 2.3% year over year to $3,001 million, led by Specialty Materials and Display Technologies. Core sales grew to $3,007 million from $2,969 million in the year-ago quarter. The top line surpassed the consensus estimate of $2,921 million.

Non-GAAP net income was $144.4 million or 43 cents per share (in line with the mid-point of the company’s guidance) compared with $166.6 million or 48 cents per share in the year-ago quarter. The bottom line missed the Zacks Consensus Estimate by a penny. Quarterly total revenues aggregated $1,138.2 million (above the mid-point of the management-provided guidance) compared with $1,133.1 million reported in the year-ago quarter. The marginal increase, despite coronavirus-led adversities leading to supply constraints and extended lead times, was largely driven by a healthy demand curve. The top line beat the consensus mark of $1,131 million.

On an adjusted basis, quarterly net income was $103.6 million or 66 cents per share compared with $144.6 million or 90 cents per share in the year-ago quarter. The bottom line surpassed the consensus estimate by 12 cents. Quarterly revenues aggregated $788.3 million compared with $849.7 million in the year-ago quarter. The decline was mainly due to a 7.5% fall in organic revenues, followed by end-market contraction due to the adverse impact of COVID-19 pandemic. However, the top line beat the consensus estimate of $758 million.

Non-GAAP net income from continuing operations was $34.7 million or $1.13 per share compared with $20.7 million or 65 cents per share in the year-earlier quarter. The bottom line beat the Zacks Consensus Estimate by 47 cents. NETGEAR generated net revenues of $378.1 million, up 42.2% year over year driven by exceptionally solid demand for CHP (Connected Home Products) in the wake of growing work-from-trend due to the COVID-19 pandemic with high bandwidth consumption. The top line surpassed the consensus estimate of $317 million. 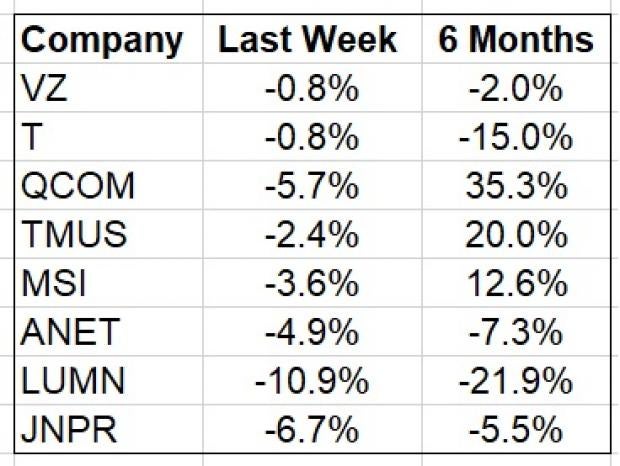 In the past five trading days, none of the stocks gained, while Lumen was the biggest decliner with its stock falling 10.9%.

Over the past six months, the Zacks Telecommunications Services industry has rallied 0.1% on average and the S&P 500 has gained 16.2%. 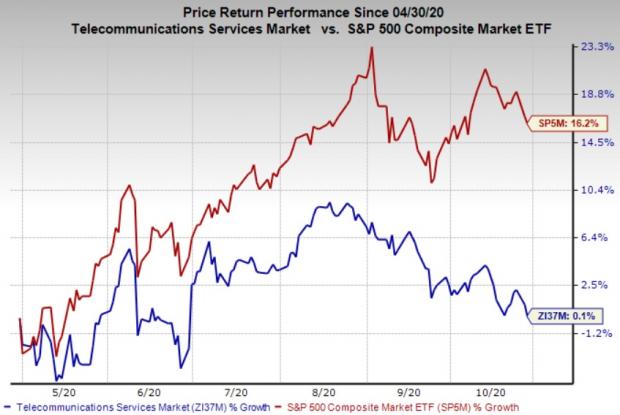 In addition to the 5G deployments and product launches, all eyes will remain glued to how the earnings season unfurls for the remaining companies of the sector.