Seagen Inc. (SGEN - Free Report) delivered adjusted earnings of $3.50 per share for the third quarter of 2020, reversing the year-ago quarter’s loss of 54 cents. The Zacks Consensus Estimate was of a loss of 8 cents per share.

Revenues of $1.1 billion were significantly up year over year, primarily driven by the two new strategic oncology collaborations with Merck. Revenues were also boosted by the uptake of Padcev and Tukysa. Royalty revenues too drove sales in the quarter. Further, the top line comprehensively beat the Zacks Consensus Estimate of $398 million.

We note that in October 2020, Seattle Genetics decided to switch over to its new corporate name, Seagen Inc.

Shares of Seagen have soared 68.4% in the year so far against the industry’s decrease of 6.9%. 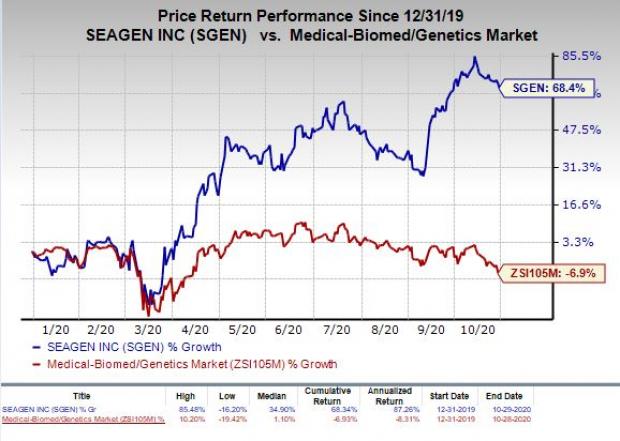 Adcetris generated net sales of $163.3 million in the United States and Canada, down 3% year over year. Meanwhile, the drug is being evaluated in several label expansion studies. A successful development and a potential approval should boost sales in the future quarters.

Padcev’s sales in the third quarter were $61.8 million, increasing 8% sequentially.

Tukysa’s third-quarter net sales were $42.4 million, marking its first full-quarter performance since its launch following the FDA approval in mid-April.

Collaboration and license agreement revenues were $758.3 million, reflecting a significant increase year over year. Seagen received an upfront payment of $725 million from Merck in September 2020. Also, during the third quarter, the company earned $26 million as milestone fees from GlaxoSmithKline (GSK - Free Report) , attributable to by the approval for the latter’s Blenrep in the United States and Europe.

Royalty revenues of $35.9 million soared from the year-ago quarter’s $27.3 million. The company records royalty revenues on the sales of Adcetris from Takeda in the ex-U.S. markets and outside and to a lesser extent, include sales of Polivy under its collaboration with Roche (RHHBY - Free Report) .

Research and development (R&D) expenses of $217.7 million escalated 11% year over year, primarily due to increased investments in developing the late-stage pipeline candidates.

Selling, general and administrative (SG&A) expenses shot up 32.7% year over year to $127.6 million, mainly on account of higher costs related to the recent launch of Padcev and Tukysa as well as higher infrastructure costs for international expansion.

Seagen provided its full-year outlook. The company now projects Adcetris’ annual net sales in the range of $650-$660 million, lower than the previous expectation of $675-$700 million. The cut in Adcetris view is due to the negative impact of the COVID-19 pandemic.

The company expects Padcev net product sales in the band of $215-$235 million, unchanged from the previous estimate.

Seagen expects SG&A expenses of $475-$525 million, which have been intact with the earlier prediction. R&D expenses also remained unchanged from the previous forecast and are now estimated to be $820-$870 million.

During September 2020, Seagen entered into two new strategic oncology collaborations with Merck to co-develop and co-commercialize its pipeline candidate ladiratuzumab vedotin, an investigational antibody-drug conjugate (ADC) targeting LIV-1. It is currently being evaluated in phase II studies for the treatment of breast cancer and other solid tumors.

We note that the approvals for Padcev and Tukysa should reduce Seagen’s heavy dependence on Adcetris in the days ahead and significantly boost its top-line growth.