In the last reported quarter, the company’s earnings surpassed the Zacks Consensus Estimate by 24.62%. Neurocrine’s track record is decent as it topped estimates in three of the last four quarters, the average earnings surprise being 8.36%.

Neurocrine’s shares have declined 8.2% compared with the industry’s decrease of 11.3%. 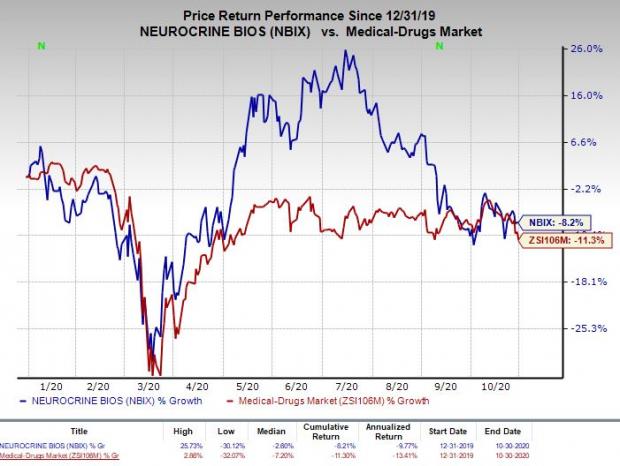 Neurocrine's Ingrezza, that is approved for treating adults with tardive dyskinesia has been the majority revenue generator for the company since its approval in 2017. The drug has shown strong demand trend in the past couple of years. Despite coronavirus pandemic, the drug’s sales growth was encouraging in the first half of 2020. We expect the uptrend to have continued in the third quarter.

However, we note that initiation of treatment for new patients with Ingrezza was significantly hurt during the second quarter due to COVID-19 related restrictions. Moreover, the company stated on its second-quarter earnings call that the third quarter has been typically a slower quarter for Ingrezza’s sales growth. Thus, the company does not expect significant increase in new patient starts.

Apart from Ingrezza, the company also earns revenues through its collaboration with AbbVie (ABBV - Free Report) and a few other companies. Revenues may vary from one quarter to quarter depending on payment of certain development, regulatory and commercial milestones as well as royalties on sales of AbbVie’s Orilissa.

Meanwhile, Neurocrine launched another drug, Ongentys, in September. The drug received approval in April 2020 from the FDA as an adjunctive therapy to levodopa/DOPA decarboxylase inhibitors in adult Parkinson's disease patients. Although the drug is unlikely to have brought significant revenues for the company, commercial activities to support its launch may have driven operating expense higher during the third quarter.

We expect the company to provide an update on the outlook for Ingrezza with gradual re-opening of economies amid the pandemic and its progress with its pipeline on the third quarter earnings call.

Our proven model does not conclusively predict an earnings beat for Neurocrine this time around. The combination of a positive Earnings ESP and a Zacks Rank #1 (Strong Buy), 2 (Buy) or 3 (Hold) increases the odds of an earnings beat. But that’s not the case here. You can uncover the best stocks to buy or sell before they’re reported with our Earnings ESP Filter.

Here are some stocks you may want to consider as our model shows that these have the right combination of elements to post an earnings beat this quarter.

Coherus BioSciences (CHRS - Free Report) has an Earnings ESP of +13.04% and a Zacks Rank of 2. You can see the complete list of today’s Zacks #1 Rank stocks here.