In the past week, the U.S. telecom stocks largely moved up on optimism surrounding the Presidential elections. With broad-based expectations that the newly elected President will help ease the uncertainty plaguing the sector and instill confidence to fuel its growth, the uptrend has mostly mirrored the broader benchmark indices. In addition, better-than-expected quarterly performance from hitherto reported companies within the sector aided the upswing.

As the world awaits the results of the elections, the industry is counting on an updated policy framework that is likely to reshape the sector dynamics in the near future. These include the bilateral trade relations with China, the ongoing trade restrictions on China-based companies due to national security reasons, 5G dominance and domestic production of chips. The repercussions are likely to reverberate with global implications, affecting the supply chain mechanism and production facilities of various U.S. firms as they push for a software-based approach to build an all-pervasive 5G network. This, in turn, is likely to encourage the incumbent President to break away from proprietary telecom networks and embrace virtual telecom model to counter the increasing dominance of China-based firms like Huawei.

Notably, Huawei is reportedly working on a plan to set up domestic chip production facility to counter the various trade restrictions of the United States. Focusing primarily on chips for the infrastructure business, the facility is likely to start production of with low-end 45nm chips and gradually shift to developing 20nm chips for 5G telecommunications equipment.

Meanwhile, dealing a severe blow to the Commerce Department, U.S. District Judge Wendy Beetlestone has issued an order that prevents the government from barring ByteDance-owned TikTok from operating in the country from Nov 12. Deeming the government stance of labeling the company a national security threat as “hypothetical”, the order also stalls the app store download ban. Although the government has decided to respect the court order, it is likely to seek a re-hearing.

Excluding non-recurring items, non-GAAP earnings in the quarter were $1.95 per share compared with $2.04 in the year-ago quarter. The bottom line beat the Zacks Consensus Estimate by 19 cents. Quarterly net sales fell 6.3% year over year to $1,868 million due to lower demand in the Americas and the International business, triggered by the coronavirus pandemonium. The top line, however, exceeded the Zacks Consensus Estimate of $1,827 million.

Non-GAAP net income came in at $192 million or $2.42 per share compared with $217.1 million or $2.69 per share in the year-ago quarter. The bottom line, however, beat the Zacks Consensus Estimate by 19 cents, delivering a positive surprise of 8.5%. Quarterly total revenues declined 7.5% year over year to $605.4 million (but surpassed the company’s guidance of $570-$590 million). This was due to extended lead times and shipment constraints resulting from the COVID-19 operating environment. The top line, however, surpassed the consensus estimate of $580 million.

3.     Altice USA, Inc. (ATUS - Free Report) reported relatively modest third-quarter 2020 results with the bottom line beating the Zacks Consensus Estimate and the top line missing the same. Despite a challenging macroeconomic environment, the company recorded solid customer additions, driven by resilience in the business model, and is likely to continue witnessing this growth momentum for the rest of the year.

Excluding non-recurring items, adjusted earnings for the reported quarter were 34 cents per share, which beat the Zacks Consensus Estimate by 11 cents. Third-quarter total revenues decreased marginally to $2,434 million from $2,438.7 million in the year-earlier quarter as higher broadband revenues were more than offset by lower video and telephony business sales. The top line missed the consensus mark of $2,473 million.

Quarterly non-GAAP net income came in at $22.3 million or 24 cents per share compared with $35.8 million or 38 cents per share in the prior-year quarter. The bottom line matched the Zacks Consensus Estimate. Quarterly revenues declined 12.8% year over year to $205.8 million, primarily due to challenges induced by the COVID-19 pandemic. The top line, however, matched the Zacks Consensus Estimate.

5.      ADTRAN, Inc. (ADTN - Free Report) reported impressive third-quarter 2020 results, with the bottom and the top line increasing on a year-over-year basis. Despite COVID-19 woes, accretive customer base and higher revenues from the Network Solutions segment on the back of software innovations boosted the performance.

Non-GAAP net income came in at $7.9 million or 16 cents per share against a net loss of $2.8 million or loss of 6 cents per share in the prior-year quarter. The bottom line beat the Zacks Consensus Estimate by 9 cents. Quarterly revenues aggregated $133.1 million compared with $114.1 million in the year-earlier quarter. The 16.7% year-over-year jump was primarily driven by higher revenues from the Network Solutions segment. Solid customer traction with broad-based growth of market segments despite the COVID-19 mayhem also played a vital role. However, the top line lagged the consensus estimate of $134 million. 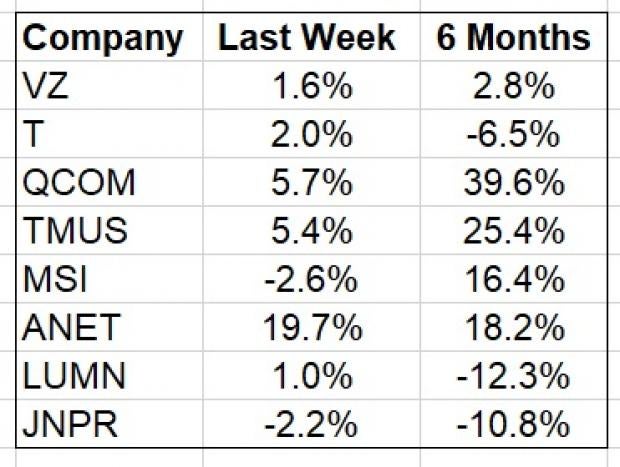 Over the past six months, the Zacks Telecommunications Services industry has rallied 3.8% on average and the S&P 500 has gained 21.2%. 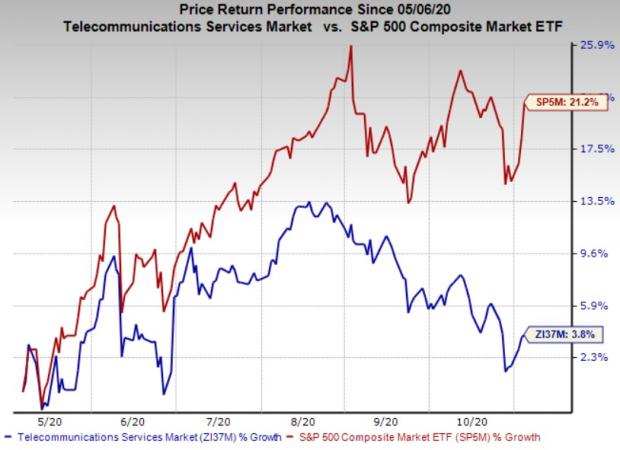 In addition to the 5G deployments and product launches, all eyes will remain glued to how the earnings season unfurls for the remaining companies of the sector.

Why Nikola (NKLA) is Likely to Disappoint in Q3 Earnings