Total revenues of $103.5 million also beat the Zacks Consensus Estimate of $93.46 million. However, revenues were down 21.5% year over year due to the absence of certain license and milestone payments recorded in third-quarter 2019.

Shares of Ironwood were up 7.3% in after-market hours on Nov 5, following the earnings release. However, the company’s shares have declined 24.8% so far this year compared with the industry’s decrease of 4.3%. 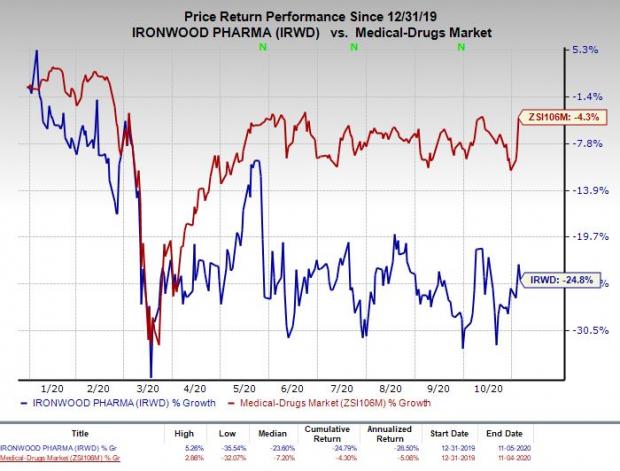 Ironwood's share of net profits from sales of Linzess in the United States (included in collaborative revenues) was $100.2 million in the third quarter, up approximately 18.4% year over year.

Per data provided by IQVIA, volume of prescribed Linzess capsules in the third quarter increased about 7% year over year.

Revenues also include $1.8 million in linaclotide royalties, $1.1 million in co-promotion revenues, and $0.4 million in other revenues.

We note that Ironwood amended its agreements with two partners — Astellas Pharma and AstraZeneca (AZN - Free Report) — related to the development and commercialization of Linzess in Japan and China, respectively, in 2019. Per the amended terms of the agreements, Ironwood stopped supplying linaclotide API to these companies and has been receiving royalties on sales of Linzess in Japan and China, beginning 2020.

Ironwood raised its previous guidance for 2020 on the back of strong demand for Linzess despite COVID-19. The company expects net sales of Linzess to grow in high-single digit percentage points (previously mid-single digit). Total revenues are anticipated in the range of $370 million-$385 million compared with the previous expectation of $360 million-$380 million. The company expects adjusted EBITDA to be more than $130 million versus more than $105 million earlier.

In September, Ironwood announced that IW-3718 failed to meet primary endpoint in one of the two identical phase III studies, evaluating it in refractory gastroesophageal reflux disease ("GERD") patients. Based on the study data, Ironwood discontinued development of IW-3718 and announced an organizational restructuring.

The company plans to reduce headcount by approximately 100 full-time employees during the fourth quarter. The company expects the initiative to result in total cost savings of approximately $95 million.