Biohaven Pharmaceutical (BHVN - Free Report) recorded loss of $3.27 per share in third-quarter 2020, wider than the Zacks Consensus Estimate of $2.74 as well as the year-ago loss of $2.04. Adjusted loss for the third quarter was $2.67 per share compared with $1.55 in the year-ago period.

Total revenues, solely from Nurtec ODT, were $17.7 million in the third quarter. The top line missed the Zacks Consensus Estimate of $20.77 million. The company did not record any revenues in the year-ago quarter.

Shares of Biohaven were down almost 3.7% on Nov 9, following the earnings release. However, the stock has gained 49.1% so far this year against the industry’s decrease of 2.2%. 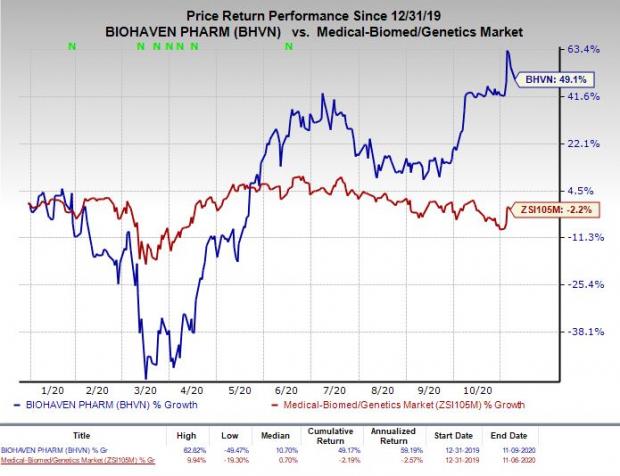 Research and development (R&D) expenses, including stock-based compensation, were $57 million in the quarter, down 7.6% year over year driven by lower clinical activities related to rimegepant following its approval as Nurtec ODT.

Selling, general and administrative (SG&A) expenses were $119.5 million in the quarter, compared with $28.8 million in the year-ago period. The significant increase in SG&A expense was driven by higher costs to support the commercial launch of Nurtec.

Biohaven stated that Nurtec ODT has demonstrated strong uptake since its launch in March 2020. Sales of the drug were up almost 80% sequentially during the third quarter despite COVID-19 related disruptions. Sales of the drug were driven by increasing market share in the rapidly growing oral CGRP segment. The company has also expanded payer coverage for the drug to over 87% of commercial lives so far. Please note that Nurtec competes with other FDA-approved anti-CGRP drugs including Amgen’s (AMGN - Free Report) Aimovig, Lilly’s (LLY - Free Report) Emgality and especially AbbVie’s (ABBV - Free Report) oral drug, Ubrelvy.

Biohaven’s Nurtec ODT is the only CGRP receptor antagonist available in an orally disintegrating tablet for the acute treatment of migraine. The company is also developing the drug as a potential preventive treatment of migraine. The company’s supplemental new drug application (sNDA) seeking approval for this indication is under review with the FDA and a decision is expected in the second quarter of 2021. A phase II study is evaluating the drug in patients with trigeminal neuralgia.

Apart from Nurtec, the company is also developing three other pipeline candidates, verdiperstat, troriluzole and zavegepant.

A phase III study evaluating verdiperstat as a potential treatment for multiple system atrophy is ongoing. Top-line data is expected in the fourth quarter of 2021

The company plans to initiate two phase III studies on troriluzole by year-end to evaluate it as a potential treatment for obsessive compulsive disorder. A phase III study is currently evaluating the candidate in patients with spinocerebellar ataxia. Enrollment in the study is expected to be completed in the fourth quarter. The candidate is also being developed as a potential treatment for Alzheimer's disease in a phase II/III study. Top-line data is expected to be announced in the first quarter of 2021.

A phase III study evaluating intranasal zavegepant as acute treatment of migraine is enrolling patients. The company plans to develop an oral formulation of the candidate and received FDA clearance in September to initiate an early-stage study. The company is also developing the candidate in COVID-19 infected hospitalized patients requiring supplemental oxygen.