Airline Stocks Gain on Vaccine News: Is the Rally Sustainable?

That airline stocks have been reeling under the coronavirus-borne crisis is by now a widely-circulated news. As a result of this universal health peril, which continues to wreak havoc even more than seven months after being declared a pandemic by the World Health Organization, passenger revenues (accounting for the bulk of the aviation companies’ top lines) took a severe beating.

This is largely because the pandemic confined people to their homes, thereby crippling air-travel demand. The sorry state of the airline stocks is evident from the fact that the Zacks Airline industry has shed 22.3% of share value since March. 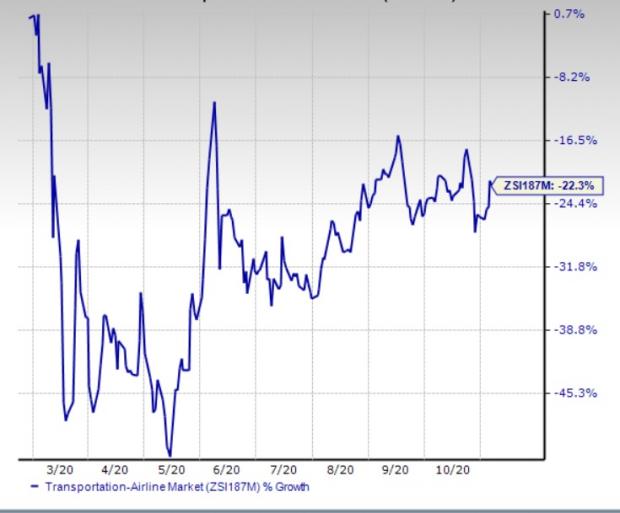 Reasons for the Monday’s Rally

After being engulfed by this unprecedented economic turmoil, investors interested in the airline industry finally had something to cheer yesterday as the NYSE ARCA Airline Index gained 19.4% with most constituents surging in double-digits. The magnitude of the rally can be understood by the uptrend exhibited by a few key industry participants like Delta Air Lines (DAL - Free Report) , American Airlines (AAL - Free Report) , United Airlines (UAL), Southwest Airlines (LUV - Free Report) and Alaska Air Group (ALK - Free Report) , which were up 17%, 15.2%, 19.1%, 9.7% and 20%, respectively, on Nov 9.

The catalyst for this astonishing uptick was the news on a vaccine candidate to combat the prevalent COVID-19 syndrome. The candidate, currently undergoing Phase III trials, is being developed by Pfizer (PFE - Free Report) , which presently carries a Zacks Rank #3 (Hold), and partner BioNTech (BNTX - Free Report) . Notably, the candidate was found to be more than 90% effective in preventing the coronavirus disease.

Apart from the high efficacy rate of the vaccine candidate, another piece of information that boosted stocks was that no serious safety concerns were observed in the study, which enrolled 43,538 participants. The interim efficacy analysis was conducted by an external, independent Data Monitoring Committee.

Naturally, the positive update on the vaccine to fight the deadly coronavirus outbreak drove stock movement in the space, which were ripped apart by this global health emergency. In fact, the favorable development buoyed stocks in most other sectors as well.

Will Airline Stocks Maintain the Momentum?

After Monday’s astonishing upswing, the question that is very likely to crop up in an airline investor’s mind is whether the upsurge is a one-off event or it is really sustainable. While it is impossible to predict exactly the future price performance of the stocks, we note that airlines have been witnessing an improvement in air-travel demand, particularly on the leisure front of late.

The betterment can be gauged from the fact that on Oct 18, 2020, passenger count (by air) in the United States crossed the 1-million mark for the first time since March when the pandemic hit hard. Notably, the Transportation Security Administration screened 1,031,505 passengers on Oct 18. The gradual improvement in the cash-burn rate is also a positive for all airline industry players.

Another ray of hope for the airlines is the possible resumption of talks on a second round of stimulus once former Vice President Joe Biden is officially declared as the President of the United States. The positive vibes around the package, which came from various quarters prior to the elections might add an impetus to the proposed grant, turning it into reality.

This much-awaited financial aid will provide a sigh of relief to the beleaguered airline industry by protecting jobs at least in the near term. Significantly, the aviation space already bore the brunt of excessive job cuts following the expiry of the CARES Act on Sep 30.

Is Systemax (SYX) a Suitable Stock for Value Investors Now?