High-end cooler company Yeti (YETI - Free Report) topped our third quarter earnings and revenue estimates on November 5 to continue its impressive run. The upstart brand has expanded its portfolio and it might be poised to become a Lululemon (LULU - Free Report) -style success.

Yeti was founded in 2006 and went public in the fall of 2018. The Austin, Texas-based company has over the years bolstered its portfolio of heavy-duty, high-end coolers, which can cost up to $1,300, and expanded its consumer base far beyond commercial fishermen and the like.

Today, Yeti’s signature coolers come in an array of colors, shapes, and sizes, and they have become staples at tailgates, cookouts, campfires, backyards, and more. Wall Street has also been pleased to see that the company makes a majority of its money outside of the more niche cooler market. Yeti’s portfolio includes drinkwear such as tumblers and mugs, as well as chairs, backpacks, dog bowls, hats, and more.

Yeti’s third quarter revenue jumped 29% to $294.6 million. This marked its strongest top-line growth as a public firm. More specifically, its drinkwear space climbed 31% to account for around 57% of total sales, with cooler sales up 27%.

Yeti’s direct-to-consumer sales jumped 62%. And the company said it continues to benefit from the social distancing world as people try to spend more time outside. Plus, Yeti’s larger ticket items might see a slight boost from the booming housing market, which is being driven by millennials. 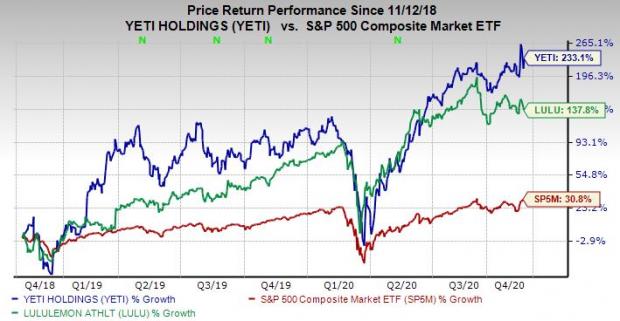 As we mentioned at the outset, investors might want to think of Yeti in a similar breath as Lululemon, which helped redefine a market while taking on legacy players like Nike (NKE - Free Report) and giving rise to imitations that can be found at places like Target (TGT - Free Report) .

Both companies are new-age, higher-end brands that have built loyal followings in the social media age where people shop directly from Instagram . Yeti and Lululemon both also have instantly recognizable brand logos and there is clear crossover in their target consumers. Peloton (PTON - Free Report) is also a part of this group of successful brands that stand out in crowded markets.

Yeti and Lululemon are also both expanding their standalone brick-and-mortar footprints—though Yeti’s is much smaller. Yeti has a flagship store in Austin, as well as locations in Denver, Charleston, Chicago, and a few other strategic locations. Yeti coolers and everything else can also be found everywhere from Dick’s Sporting Goods (DKS - Free Report) and REI to other retailers that fit its brand image.

The chart shows us that Yeti stock has outpaced LULU over the past two years, up 233% vs. 138%. This outperformance is more striking over the last six months, with Yeti shares up over 100% and Lululemon up 33%. Yeti surged 8% during regular trading Tuesday to close at $55.64 a share, which puts it about 10% below the records it hit right after last week’s release.

Despite its outperformance, Yeti trades at 31.9X forward earnings. This comes in not too far above its one-year median and marks a big discount against Lululemon’s 54.7X. The same is true when we look at forward sales. Yeti also continues to improve its margins through larger DTC sales, product cost improvements, and more.

Zacks estimates call for Yeti’s fourth quarter revenue to jump over 16% to reach $346.6 million. Taking a broader view, Yeti’s fiscal 2020 sales are expected to surge 16% to come in at $1.06 billion, while FY21 is projected to come in another 13% higher. Both of these figures would come on top of FY19’s 17% revenue growth.

At the bottom-end of the income statement, Yeti’s adjusted FY20 earnings are projected to climb 25% to $1.50 per share, with FY21 expected to come in another 20% higher. And Yeti has crushed our earnings estimates by an average of 72% over the trailing four quarters.

Yeti’s positive post-release earnings revisions help it grab a Zacks Rank #1 (Strong Buy) right now. Yeti also sports an “A” grade for Growth and a “B” for Momentum in our Style Scores system. Plus, its Leisure and Recreation Products space sits in the top 14% of our over 250 Zacks industries. And it might be worth taking a chance on Yeti stock for the holiday shopping period and beyond.