Equitrans Midstream Corporation’s (ETRN - Free Report) Mountain Valley Pipeline (“MVP”) project construction in Appalachian Basin has been subjected to temporary suspension at the request of eight environmental groups challenging the pipeline. The 4th Circuit Court of Appeals issued the temporary halt of the key water crossing permits for the project’s completion in Virginia and West Virginia.

The proposed natural gas pipeline system is owned and operated by Mountain Valley Pipeline, LLC, a joint venture between Equitrans, NextEra Energy (NEE - Free Report) , Consolidated Edison Inc. (ED - Free Report) , RGC Resources Inc (RGCO - Free Report) and AltaGas Ltd, with Equitrans holding a major stake. The project construction began in the first quarter of 2018 at an estimated cost of $3.5 billion. However, it was encumbered into a series of legal issues over federal permits, leading to time and cost overruns.

The MVP pipeline system, with a diameter of upto 42 inches, is expected to have a transmission capacity of about 2 billion cubic feet (Bcf) per day to markets in several regions of the United States. It stretches approximately 303 miles from the north-western West Virginia to Southern Virginia as an interstate pipeline regulated by the Federal Energy Regulatory Commission (FERC).

The U.S. Federal had issued an emergency halt on Oct 16, which remains valid until the court rules on the environmental groups’ petition to invalidate the water crossing permits for the MVP project. However, the court’s decision does not necessarily mean it will outweigh the pipeline construction. Per Natalie Cox, a spokesperson for the project, the crew members are proceeding with other aspects of the project, including authorized forward construction work in highlands along the route. The ongoing activities will help maintain and enhance erosion and sedimentation controls. They will also lead to completion of the restoration work along the right-of-way segments, which is a precautionary measure for the environment.

Equitrans currently carries a Zacks Rank #3 (Hold). The company’s shares have underperformed the industry in the past six months. The stock has declined 6.5% compared with the industry’s 6.3% fall. 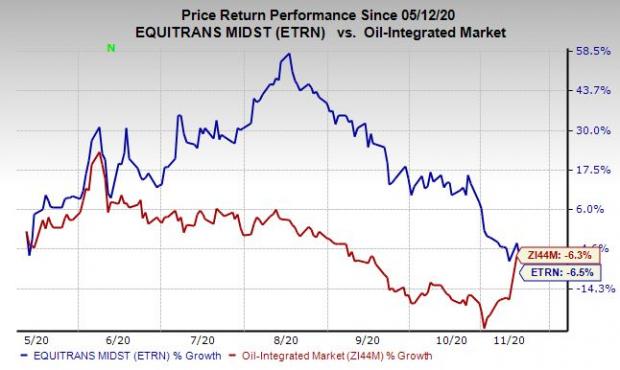 JD.com (JD) to Report Q3 Earnings: What's in the Offing?