In the past week, the U.S. telecom stocks largely moved up on optimism surrounding the victory of Joe Biden in the highly contentious Presidential election. With broad-based expectations that the President-elect will help ease the uncertainty plaguing the sector and instill confidence to fuel growth, the uptrend has mostly mirrored the broader benchmark indices. In addition, positive results from an experimental COVID-19 vaccine aided the upswing with high expectations of a mass vaccine hitting the markets in early 2021.

In an open letter to the President-elect, Broadband association US Telecom has sought the attention of the government on five connectivity-related priorities in his first 100 days in the office. These include the task of connecting every American to the broadband, making it affordable to the masses, adopting modern national online consumer protection policy, fortifying global cybersecurity leadership and coordinating ‘Technology Policy’ at the highest level. The industry is also counting on an updated policy framework that is likely to reshape the sector dynamics in the near future. These include the bilateral trade relations with China, the ongoing trade restrictions on China-based companies due to national security reasons, 5G dominance and domestic production of chips. Furthermore, the industry has urged the administration to disown a plan to form a government-backed 5G network. This followed reports that the Department of Defense is mulling a bid process to select a company to build a nationalized 5G network.

The purported move gains precedence as China has reportedly stepped up the heat by launching the world’s first 6G communication test satellite last week to examine the performance of 6G network in space. Leveraging terahertz frequency that expands beyond the 5G millimeter wave, 6G is expected to be more than 100 times faster than 5G with lossless transmission in space facilitating long-distance communications with smaller power output. With 5G technology still in the nascent stage across the globe, the aggressive stance by the communist nation to gain a competitive advantage in 6G is likely to spur more technological innovations by domestic industry groups in the same space.

Meanwhile, the Trump administration has come down heavily on China-based firms that are allegedly owned or controlled by the military by issuing an executive order that prohibits any U.S. investment in these entities. The order will ban pension funds and other investment firms from buying shares in 31 China-based companies from Jan 11, 2021. The U.S. Justice Department has also appealed against a federal judge decision that prevented the government from imposing strict restrictions on TikTok. Notably, U.S. District Judge Wendy Beetlestone had issued an order that prevented the government from barring ByteDance-owned TikTok from operating in the country from Nov 12. Deeming the government stance of labeling the company a national security threat as “hypothetical”, the order had also stalled the app store download ban.

Regarding company-specific news, earnings and acquisition primarily took the center stage over the past five trading days.

1.     Despite a challenging macroeconomic environment triggered by the coronavirus pandemic, Qualcomm Incorporated (QCOM - Free Report) reported solid fourth-quarter fiscal 2020 results, primarily driven by the ramp-up in 5G-enabled chips. Both top and bottom-line figures beat the Zacks Consensus Estimate, backed by the strength of the business model and the ability to respond pro-actively to the evolving market scenario. A long-term settlement deal with Huawei further propelled the stock to a record high.

Quarterly non-GAAP net income came in at $1,669 million or $1.45 per share compared with $947 million or 78 cents in the year-ago quarter. Undeterred by the adverse impact of the virus outbreak, record high non-GAAP earnings per share were largely driven by top-line growth. The bottom line exceeded management’s guidance and beat the Zacks Consensus Estimate by 26 cents. Non-GAAP revenues for the reported quarter were $6,502 million compared with $4,804 million in the year-earlier quarter. The figure surpassed the consensus mark of $5,935 million and was well above the company’s guided range, driven by 5G strength, high-performing core chipsets and new RF front-end content.

Adjusted earnings per share came in at $1.17, beating the Zacks Consensus Estimate by 66 cents, with the earnings surprise being 129.4%. Quarterly total revenues soared 74.2% year over year to $19,272 million, driven by the Sprint merger and customer growth. The top line surpassed the consensus estimate of $18,254 million.

3.     TELUS Corporation (TU - Free Report) recently announced that it has inked a definitive agreement to acquire Lionbridge AI for approximately $935 million (C$1.2 billion) to augment its AI (artificial intelligence) capabilities as demand for high-quality, multilingual data annotation continues to rise. The transaction is likely to be completed by the end of 2020 subject to the fulfillment of mandatory closing conditions and regulatory approvals.

The acquisition is a strategic fit for TELUS as it aims to harness the power of technology to accelerate its digital transformation policy. The buyout will enable the company to expand its global service offerings for higher market penetration in one of the fast growing services in the world.

Net income in the September quarter was $85 million or 97 cents per share compared with $23 million or 27 cents per share in the year-ago quarter. Despite relative flat revenue trajectory, the more than three-fold rise in earnings was primarily driven by lower operating costs and lower income tax expenses. The bottom line beat the Zacks Consensus Estimate by 67 cents. Quarterly total operating revenues remained relatively flat at $1,027 million. Lower data rates along with a decrease in new smartphone unit sales led to soft revenues. The top line surpassed the consensus estimate of $997 million.

On a GAAP basis, net income in the September quarter was $2 million or 3 cents per share compared with $3.2 million or 5 cents per share in the year-ago quarter. The bottom line beat the Zacks Consensus Estimate by 8 cents, delivering a positive surprise of 160%. Quarterly total revenues declined 6.4% year over year to $554.3 million. This was largely due to a decrease in U.S. commercial airline traffic. The top line lagged the consensus estimate of $565 million. 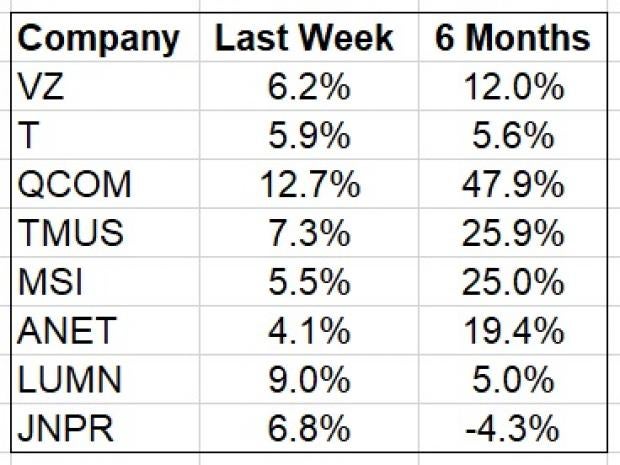 In the past five trading days, Qualcomm has been the best performer with its stock gaining 12.7%, while none of the stocks declined.

Over the past six months, the Zacks Telecommunications Services industry has rallied 13.3% on average and the S&P 500 has gained 26.6%. 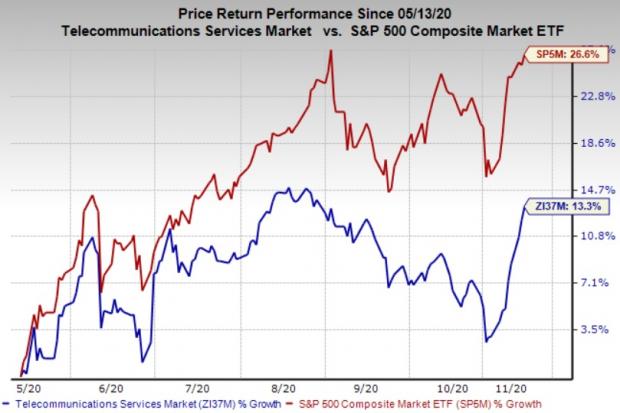