Shares of Charles Schwab (SCHW - Free Report) gained 1.9% after the company announced its activity report for October 2020. Notably, on Oct 6, it concluded the acquisition of TD Ameritrade Holding for $22 billion, which led to the creation of a behemoth in the online brokerage space. Thus, the metrics for the reported month represents data for the combined company.

Schwab’s active brokerage accounts totaled 29.01 million at October-end, up 102% sequentially and 138% from the year-ago month. Further, clients’ banking accounts were 1.50 million, rising 1% from September 2020 and 9% from October 2019. The number of retirement plan participants was 2.07 million, up 20% from the prior-month level and 19% year over year.

The company’s acquisitions are expected to strengthen its position as a leading brokerage player and be accretive to earnings. Moreover, its efforts to offer commission-free trading is leading to higher client assets and a rise in brokerage accounts, which, in turn, will improve Schwab’s market share.

So far this year, shares of Schwab have lost 1.4% against 3.3% growth recorded by the industry. 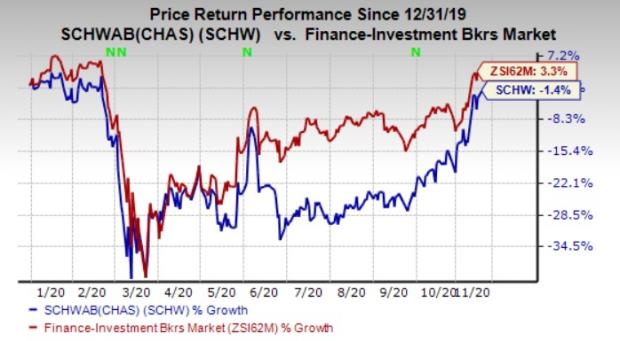