The stock prices of both Nikola Corporation (NKLA - Free Report) and General Motors (GM - Free Report) soared yesterday when rumors surfaced among investors that the long-pending deal between the companies has been finalized.

A page on the General Motors website discussing the company’s tentative partnership with Nikola was widely circulated among investors desperate for the deal to conclude. However, the investors overlooked the mention of the words “The transaction has not yet closed” on the webpage in question. This apparently created the confusion that the deal has been successfully closed between the automakers, prompting the appreciation in their share prices.

However, Nikola’s management denied the rumors and reaffirmed that the two companies are yet to reach an agreement.

Backdrop of the Situation

Early this September, General Motors and Nikola decided to enter into an alliance per which the former would aid the latter in engineering and manufacturing its Badger — a fully-electric and hydrogen fuel-cell electric pick-up truck. As part of the deal, General Motors would acquire an 11% stake worth $2 billion in Nikola as well as the right to nominate one Nikola board member in exchange for its in-kind services.

This deal is a classic example of tie-up between traditional auto makers and start-up companies trying to revolutionize the EV space, and highlights their commitment to an electric future.

Nevertheless, this was followed by a report from the short selling firm, Hindenburg Research, accusing Nikola of serious fraud. Per the allegations, the company had misled investors over its electric vehicle (EV) proprietary technology stating that the same was purchased from another company. In the report, Hindenburg claimed to have never witnessed such level of deception by a public company of this magnitude. Among the numerous accusations, there was one in which the firm has accused Nikola’s founder and executive chairman Trevor Milton for deceiving the public by claiming the usage of in-house manufactured inverters, which, in reality, were supplied by a third party.

Nikola's weak response to Hindenburg’s allegations has not only raised red flags about the company’s honesty but also put investors in a fix.

This was followed by the shocking voluntary resignation of Milton from the company, which came in as a huge setback for the electric-truck maker’s soaring EV ambitions as he played a key role in driving the company’s vision.

Shares of Nikola — peers of which include Navistar International Corporation (NAV - Free Report) and PACCAR Inc. (PCAR - Free Report) — tumbled in the stock market following this series of events, thus lowering the value of General Motors’ potential stake in the company.

In the meantime, Stephen Girsky, former vice-chairman of General Motors and Nikola director, had been appointed as the new chairman of Nikola.

Deadline to the Tentative Deal

Amid Nikola’s defamation, General Motors did not close the deal with the former by Sep 30, as expected and instead the companies went into renegotiations about the potential partnership.

The Detroit-based auto giant now desires a higher stake in the electric start-up in return for sharing its fuel cell and battery technologies as well as building the Badger.

The companies have until Dec 3 to close the deal. Moreover, General Motors has the option to terminate the contract without incurring any penalties until the Dec 3 cut off.

As of now, General Motors’ partnership with Nikola is stagnant as both companies are engaged in discussions on the same.

Shares of General Motors have appreciated 16.7% year to date, while Nikola’s stock has surged 146.3%. 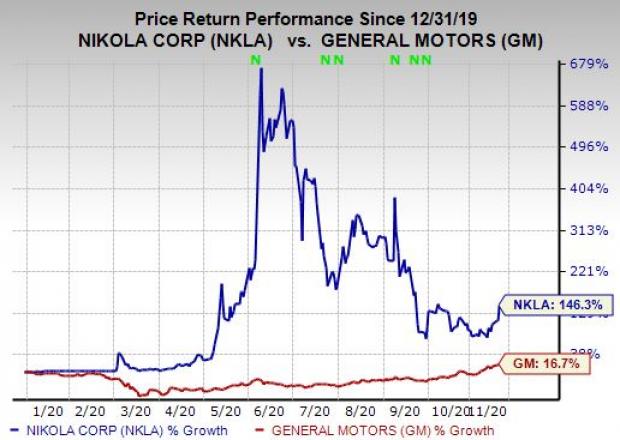