In the past week, United Airlines’ (UAL - Free Report) management revealed that the carrier witnessed a slowdown in in system bookings and an uptick in cancellations as a result of the recent spike in coronavirus cases in the United States. Similar sentiment was echoed by Alaska Air Group (ALK - Free Report) in an investor update. Notably, Southwest Airlines (LUV - Free Report) issued a similar statement as was reported in the previous week’s write up.

On a more cheerful note, another Latin American carrier Gol Linhas Aereas Inteligentes (GOL - Free Report) stated that it expanded its capacity to an average of 363 flights a day during October, up 34% from the comparable figure in September. The company saw 34% improvement in demand in the period from the September reading.

Synopsis of the Past Week’s Top Stories

1.  With increasing cancellations for the week ended Nov 18 and the spike in coronavirus cases hampering bookings, United Airlines’ management anticipates its fourth-quarter 2020 capacity to decrease at least 55% year over year compared with a decline of approximately 55%, expected previously. For total revenues, the airline, currently carrying a Zacks Rank #4 (Sell), maintains its projection of a roughly 67% drop year over year in the December quarter. It continues to expect average daily cash burn of nearly $15-$20 million in the ongoing quarter.

2.     In an investor update, dated Nov 19, Alaska Air management stated, “We believe that renewed restrictions by many state and local governments have negatively impacted demand in the immediate term.” Thanks to this deceleration in demand, the carrier anticipates revenue passengers to weaken in November from the October reading. Revenue passengers are estimated to plunge 65-70% year over year in November compared with the October slump of 64%. Total revenues, which fell 62% year over year in October, are predicted to plummet almost 60-65% in November. Meanwhile, capacity, which plunged 45% in October is forecast to decrease approximately 40% in November. Load factor (percentage of seats filled with passengers) is expected to decline to approximately 40-45% in November from 49% in October. The airline anticipates fourth-quarter capacity to be down approximately 40% year over year. Due to tepid demand, the carrier expects its November cash burn to rise to approximately $125-$150 million from the October cash burn of around $97 million.

3.   Copa Holdings incurred a loss (excluding 8 cents from non-recurring items) of $2.86 per share in third-quarter 2020, wider than the Zacks Consensus Estimate of a loss of $2.79. However, in the year-ago quarter, the company reported earnings of $2.45 per share.

Thanks to coronavirus-led government-imposed restrictions on travel, the company could not operate scheduled commercial flights during the first 45 days of the third quarter. From Aug 14, the airline resumed limited scheduled commercial operations due to Panama's restrictions on the number of flights and entry for non-citizens and non-residents. Since then, it has been gradually increasing its flight capacity. Quarterly revenues tanked 95.4% to $32.4 million and also lagged the Zacks Consensus Estimate of $39 million.

4.   Gol Linhas’ gross sales in October were R$827 million, up 3% month over month. Additionally, gross revenues rose 23% to R$603 million in October from September-levels. Average load factor (% of seats filled with passengers) was 78% last month, down by 2 percentage points from September levels. Anticipating the increase in travel demand to continue, Gol Linhas further boosted its November capacity to operate nearly 372 flights a day and 450 flights daily on peak days.

5.  JetBlue Airways (JBLU - Free Report) suffered a setback on the labor front when its in-flight crew members voted down a provisional deal between the company and the Transport Workers Union (TWU). Notably, TWU represents the in-flight crew members of this Long Island City, NY-based carrier. Significantly, the provisional deal was inked between the involved parties in October 2020. 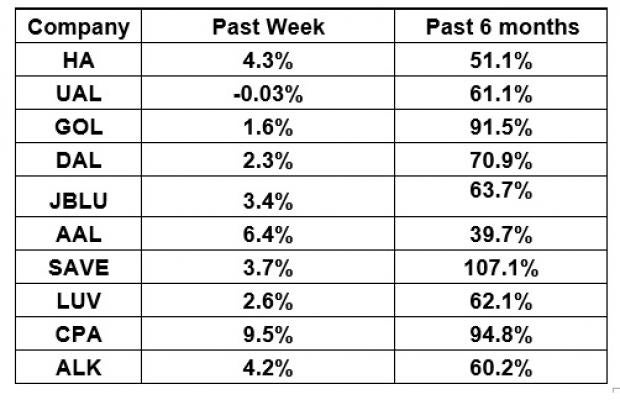 Following the Centers for Disease Control and Prevention’s warning against Thanksgiving travel due to the surging coronavirus cases in the United States, we will get the actual picture on the same in the coming days.