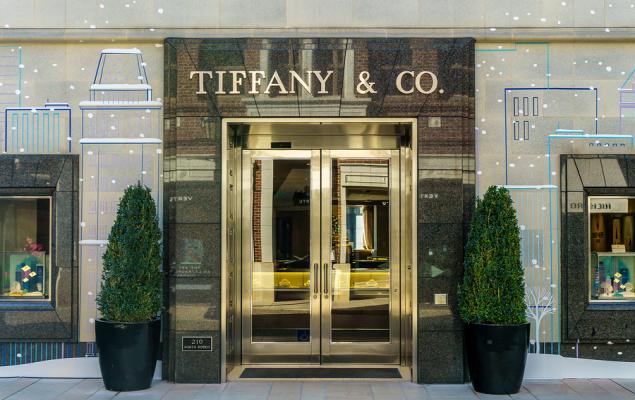 Tiffany & Co. came out with its third-quarter fiscal 2020 results, wherein both the top and the bottom lines came ahead of the Zacks Consensus Estimate. While quarterly earnings improved year over year driven by prudent cost management, net sales declined from the year-ago period.

Nonetheless, the rate of sales decline decelerated sharply on a sequential basis. We note that strong sales in Mainland China and sturdy e-commerce business aided the upbeat performance.

This designer, manufacturer and retailer of jewelry posted adjusted earnings of $1.11 per share that surpassed the Zacks Consensus Estimate of 75 cents. The figure showcased an increase of 73% year over year owing to higher gross and operating margins, and a lower effective income tax rate.

Worldwide net sales decreased 1% year over year to $1,008.2 million but marginally topped the Zacks Consensus Estimate of $1,006 million. Markedly, the rate of decline has decelerated from 29% witnessed in the preceding quarter. Again, comparable sales rose 3% during the quarter under review. This followed a decline of 24% in the preceding quarter. On a constant-exchange-rate basis, net sales declined 2% but comparable sales grew 1% from the prior year.

We note that shares of this Zacks Rank #3 (Hold) company have increased 8.2% in the past three months compared with the industry’s rally of 13%.

Geography-wise, net sales in the Americas dropped 16% to $354 million, while comparable sales declined 15%. Sales decreased across most of the region due to fall in foreign tourism on account of the COVID-19 pandemic.

In the Asia-Pacific region, net sales surged 30% to $382 million, while comparable sales climbed 40%. We note that robust retail sales increase in Mainland China and Korea was partly offset by mixed performance across other markets in the region.

In Japan, net sales declined 8% to $156 million, while comparable sales slid 4%. Management stated that fall in foreign tourism in the region and strong growth in the last year because of increased consumer demand prior to the consumption tax increase, which occurred on Oct 1, 2019, resulted in decline during the quarter under review.

In Europe, net sales decreased 6% to $104 million, while comparable sales fell 6%. Sales decreased across most of the region owing to decline in foreign tourism on account of the ongoing crisis.

Other net sales fell 30% to $12 million due to decreases in sales within the Emerging Markets region.

Sales for jewelry categories were as follows — Jewelry Collections grew 7%, while both Engagement Jewelry and Designer Jewelry decreased 6%.

Tiffany, which shares space with Signet (SIG - Free Report) , ended the quarter with cash and cash equivalents and short-term investments of $1,145.7 million and total debt (short-term borrowings and long-term debt) of $1,431.1 million, reflecting 44% of stockholders’ equity compared with 31% in the year-ago period. This increase was due to $500 million drawdown on the revolving credit facility during the first quarter, which remained outstanding at Oct 31, 2020.

The ODP Corporation (ODP - Free Report) has a long-term earnings growth rate of 6.8%. Currently, it sports a Zacks Rank #1 (Strong Buy). You can see the complete list of today’s Zacks #1 Rank  stocks here.

Target (TGT - Free Report) has a trailing four-quarter earnings surprise of 52.4%, on average. The stock carries a Zacks Rank #2 (Buy).