Hologic, Inc. (HOLX - Free Report) recently announced that the FDA has approved a diagnostic claim for its HIV-1 (human immunodeficiency virus type 1) viral load monitoring assay– the Aptima HIV-1 Quant Dx assay. This has made the assay the first dual-claim assay for both diagnosis and viral load monitoring in the United States.

For investors’ note, the Aptima HIV-1 Quant Dx assay is a molecular diagnostic test that runs on the fully automated sample-to-result Panther system and was approved in late 2016 for viral load monitoring.

With the recent regulatory approval, Hologic aims to strengthen its Diagnostics business on a global scale.

The Aptima HIV-1 Quant Dx assay, which is also CE IVD-marked for both diagnostic and viral load monitoring claims, utilizes a dual target approach against highly conserved regions in the HIV genome (the complete set of genes or genetic material present in a cell or organism). The assay has been designed to offer reliable and consistent qualitative and quantitative results across HIV-1 groups and subtypes.

Per management, this new claim for the company’s highly sensitive and reliable HIV test has the potential to improve patient care. Hologic also believes that a simultaneous viral load measurement with diagnosis will enable healthcare providers to guide treatment choices for patients to commence therapy at the earliest. The dual claim will also help Hologic’s clinical laboratory customers, those who are constantly seeking to combine their testing onto one automated platform.

Given the market potential, the regulatory amendment is expected to significantly boost Hologic’s Diagnostics business globally.

Of late, Hologic has witnessed a series of developments in its Diagnostics business.

The company, this month, received the CE Mark in Europe for its new Genius Digital Diagnostics System, the first digital cytology platform that combines a new A.I. algorithm with advanced digital imaging. Also this month, Hologic confirmed that the Diagnostics business had performed robustly, mainly due to the unprecedented surge in COVID-19-related testing during its earnings call.

Hologic, in October, announced the amendment of the FDA’s Emergency Use Authorization (“EUA”) that was initially received for its Aptima SARS-CoV-2 assay in May.

In September, Hologic announced that its CE-marked Aptima HIV-1 Quant Dx assay has been awarded World Health Organization prequalification for testing of dried blood spot samples. The same month, Hologic received the EUA for its Panther Fusion SARS-CoV-2 assay, which is another molecular diagnostic test for COVID-19. 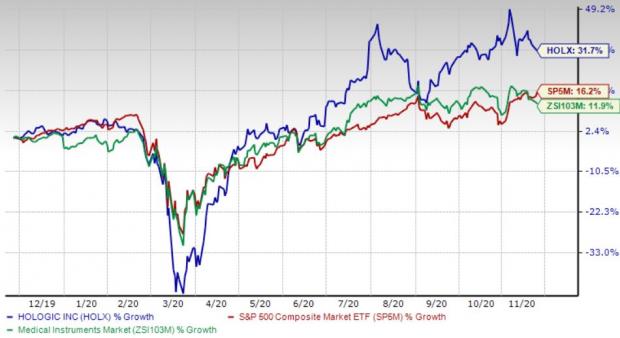