Orange S.A. (ORAN - Free Report) has launched a 5G network in 15 municipalities in France, including Nice, Marseille, Le Mans, Angers and Clermont-Ferrand. By the end of 2020, the service provider plans to cover more than 160 municipalities with 5G.

Headquartered in Paris, Orange is one of the world’s leading telecommunications carriers with a turnover of €42 billion in 2019. Present in 26 countries, the company had a total customer base of 257 million at the end of September 2020. This includes 212 million mobile customers and 21 million fixed broadband customers.

On Oct 1, Orange secured the largest share of the frequency blocks involved in the auction, with 90 MHz of spectrum. This deployment focuses mainly on 3.5GHz frequencies and may be supplemented by the use of 2.1GHz frequencies. Parallelly, Orange continues to deploy 4G and aims to switch all its sites to 4G by 2020.

5G is the first mobile standard that integrates the optimization of energy consumption into its design. It is becoming an asset for energy transition by promoting the advent of IoT. Orange has launched four 5G packages. The company is well positioned to deliver the true potential of 5G to enhance customer experience.

It is to be seen how the company carries this momentum and if the new service launch can actually help it generate profitable revenues in the days to come.

Orange’s shares have gained 9.6% in the past three months against 4.1% decline of the industry. 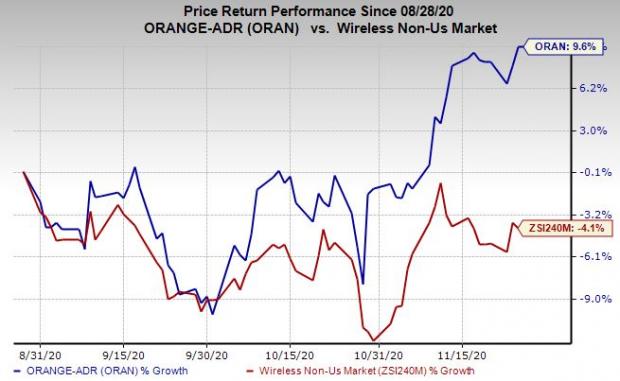 Some better-ranked stocks in the broader industry are Plantronics , United States Cellular (USM - Free Report) and NIC , each sporting a Zacks Rank #1 (Strong Buy). You can see the complete list of today’s Zacks #1 Rank stocks here.

Plantronics delivered a trailing four-quarter earnings surprise of 568.2%, on average.

NIC delivered a trailing four-quarter earnings surprise of 27.5%, on average. The company’s earnings beat the Zacks Consensus Estimate in two of the last four quarters.

5 Top-Ranked Growth Stocks to Buy Instead of Bitcoin